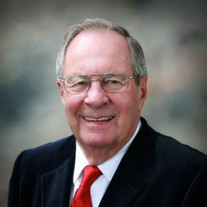 On Monday, June 14, 2021, Joseph LaMantia Jr., loving husband, father, grandfather, and great grandfather passed away at the age of 88. Joe was born to Joseph and Verna LaMantia Sr. Joe was a first-generation American, with deep roots in South Texas and began his successful agriculture career in Carrizo Springs in the 1950s. In 1965, the Rio Grande Valley became home for the LaMantia family and headquarters for the growing business ventures of which Joe oversaw. In 1977, Joe diversified his business interests when he ventured into the beer distribution industry as a wholesaler of Anheuser-Busch products. That was the beginning of the family-owned and operated business of L&F Distributors. Many speculated that it was cheaper for Joe to buy the distributorship than to keep buying his children’s beer. The company began in 1977 in McAllen, Texas with 11 employees. Today, L&F Distributors has grown to employ 1,091 individuals, with 7 locations serving 53 counties in Texas. A champion of educational opportunity, Joe established one of the first scholarships for women athletes at the University of Texas-Pan American, the Ann LaMantia Outstanding Woman Athlete Scholarship. The scholarship was named in honor of his wife of 30 years, Ann LaMantia, who passed away in 1983. Under Joe’s leadership, L&F Distributors formed a partnership with the Hispanic Scholarship Fund in 1994 and raised over $5 million and awarded over 2,600 scholarships in eight years to the students in south Texas. In 2002, upon joining forces with his family and respected business leaders from the community, Joe established Stars Scholarship Fund, which awards scholarships to students from south and west Texas. This initiative was prompted by the conviction that an educated citizen is essential to the growth and future success of South Texas. As Chairman and Founder of Stars Scholarship Fund, Joe oversaw the disbursement of over $35.1 million in scholarships, to assist over 17,074 students in the community. Joe participated in numerous other civic organizations including the Rio Grande Cancer Treatment Research Foundation, the American Heart Association, the Rio Grande Council Boy Scouts of America, the South Texas Communities for Youth Service, Lion’s Club, and the Special Olympics. In 1974, Joe was appointed by Governor Dolph Briscoe to the Board of the Texas Department of Corrections where he served for 15 years. Joe’s many accolades include being named Border Texas of the Year, Distinguished Citizen by the Rio Grande Council Boys Scout of America, the President of Excellence Award Citizen of the Year by the University of Texas Health Science Center at San Antonio’s Regional Academic Health Center Medical Education Division. The University of Texas-Pan American awarded him their Bridge Builder Award in 2006 and the Hispanic Chamber of Commerce awarded him the Golden Eagle Award. Washington’s Birthday Celebration Association honored him as Mr. South Texas. Joe received an Honorary Doctor of Humane Letters Degree from Texas A&M University-Corpus Christi and a Life Service Award from the National Beer Wholesalers Association. Family was the core of life, joy, and success for Joe LaMantia, Jr. Joe had a passion for history, hunting, and ranching. He was known for his quick wit, no non-sense approach to life, and caring spirit. He is survived by his loving wife of thirty-six years Derrelene, his five children, Val (Guy), Joe, III (Marilyn), Greg (Laurie), Steve (Linda), Tony (Jennifer), and two stepchildren Jennifer and Lori (Felix), plus numerous adoring grandchildren and great-grandchildren. He is preceded in death by (parents) Joseph and Verna LaMantia, (wife) Ann LaMantia (sisters) Marie, Ann, Shirley, Verna, and Joan. Maria LaMantia, Phil LaMantia, and Grant Peisen. Viewing & Visitation will be held Thursday, June 17, 2021, from 5pm – 7pm at Kreidler Funeral Home (314 N 10th St. McAllen, TX 78501). A Celebration of Life will be held on Friday, June 18, 2021, from 11:30am to 1:30pm at McAllen Country Club (615 Wichita Ave, McAllen, TX 78503). In lieu of flowers, the family prefers donations to be made in Joe’s honor to Stars Scholarship Fund, P.O. Box 3068, McAllen, Texas 78502-3068. A special thank you to Rick Fernandez Healthcare LLC., Jerry, Jose. Domingo, Ayhan, Josh, Megan & Jessica.

On Monday, June 14, 2021, Joseph LaMantia Jr., loving husband, father, grandfather, and great grandfather passed away at the age of 88. Joe was born to Joseph and Verna LaMantia Sr. Joe was a first-generation American, with deep roots in South... View Obituary & Service Information

The family of Joseph LaMantia Jr. created this Life Tributes page to make it easy to share your memories.