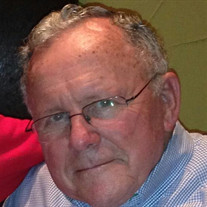 William C. (Bill) Lee, age 79, went to be with his Lord and Savior Jesus Christ on July 31, 2018. Bill was born on June 19, 1939 in Waco, Texas to his loving parents Hellen Ford Williams Lee and W. R. Williams. After Bill’s father died, he was raised, along with his brother Mike Lee, by their devoted parents Hellen and E. Vernon Lee. Bill graduated from Waco High School in 1957 after which he received an appointment to and attended the United States Naval Academy. After meeting and marrying Helen Kelley Lee in 1960, Bill graduated from Texas A&M University (Class of ‘61) with a degree in accounting, received his MBA from Southern Methodist University, and became a licensed certified public accountant. Bill is survived by his children Kelley Lee and his wife Jay Jay and Laurie Lee Barker and her husband John, his brother Mike Lee and his wife Marissa, his grandchildren, Amanda Lee, Jennifer Lee, Alexander Pappas, Austin Monroe, Colton Monroe, and Will Barker, and one great-grandchild Hansen Monroe. Bill was a devoted husband of 42 years to Helen who preceded him in death and a loving and patient father and grandfather who exemplified the unconditional love of Christ. Bill was an active member of his church and had a successful career in banking, spending many years at both First National Bank in Dallas and InterFirst Bank in Houston. Bill loved the Lord, his family, and friends. He quietly shared his faith with all, preferring to lead by example. Bill was kind and generous to any in need and was a strong supporter of Young Life in Dallas as well as several overseas mission causes. He enjoyed playing golf, water skiing, snow skiing, hunting, reading, traveling, and coin collecting and spent many fun evenings with family and friends playing bridge, hearts, and dominos. Bill liked gospel music, especially Bill Gaither Homecoming concerts. Although a bit reserved and shy, Bill loved to laugh and had a quick witted sense of humor. Bill will be greatly missed by his family and friends, but we look forward to reuniting with him in heaven. There will be a graveside service on Sat., Aug 4, 2018, at 10:00 a.m. at Restland Funeral Home and Cemetery which is located at 13005 Greenville Ave., Dallas, Texas 75243 and can be reached at (972) 238-7111.

The family of William C. Lee created this Life Tributes page to make it easy to share your memories.