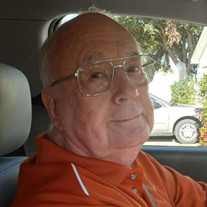 William Ray Duck, age 87, passed away on December 22, 2021 and joined his Heavenly Father. He was born on January 12, 1934 to Ray and Effie Duck of Mpls, MN. He served in the U.S. Army and graduated from University of Minnesota with a Business Adm degree while working part-time for Red Owl groceries. He managed the MEDIC drug chain based in OH, was a salesman for Johnson and Johnson, V P of Medico Drug and ultimately worked for the McAllen Police Department first as a reserve police officer and then an Administrator. Bill was interested in medicine, business and law enforcement and had the opportunity to “practice” i tall during his life. Unfortunately, he didn’t have the opportunity to become a physician but got close by entering pharmaceutical management and surrounding himself with friends who were physicians ,business owners or civic minded individuals. He was a great medical resource and loved to research medicine and educate himself about health and treatments. Second only to a physician, he loved law enforcement. From the early days of catching retail shoplifters and getting his bell rung by a shoplifter who hit him with a loaf of bread to his time as a reserve police officer, he enjoyed it all. He believed in law and order and integrity which he exemplified and passed on to his children. He was proud of the character and accomplishments of each of his children as they have all grown their own families with his values .Bill was extremely active and enjoyed playing tennis and going boating. Each summer, he would load up the family and caravan North to Lake Travis for a week of boating and tennis with his friends and their families. He encouraged his children to participate in sports and extracurricular activities and to contribute to society .Bill is survived by wife, Maria Garza Duck, brother, John and Katherine Duck, 4 children, John Duck and wife Tina, Tom Duck and wife Druanne, Linda James and husband Nick, and Christina Sosa and husband Rey, and 11 grandchildren, and 5 great grandchildren. He was preceded in death by his parents, Ray and Effie Duck, and brother James and Barbara Duck. In lieu of any flowers, the family would request donations to be made to the Wounded Warrior Project https://support.woundedwarriorproject.org/

William Ray Duck, age 87, passed away on December 22, 2021 and joined his Heavenly Father. He was born on January 12, 1934 to Ray and Effie Duck of Mpls, MN. He served in the U.S. Army and graduated from University of Minnesota with a Business... View Obituary & Service Information

The family of William Ray Duck created this Life Tributes page to make it easy to share your memories.