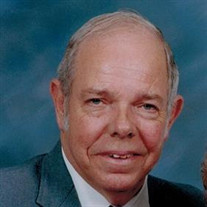 William Bruce Covey(Bruce) 75 years old from McAllen, TX died Sunday June 3, 2018 in McAllen. Bruce was born May 9, 1943 in Corpus Christi, TX to Edith and William(Bill) H. Covey. He married Oleen Teer Covey on January 20, 1968. He spent his early childhood in Bay City, TX until moving to Edinburg, TX. He attended Southwest Texas State University in San Marcos, TX. He then moved back to the Rio Grande Valley where he spent the rest of his life. He sold insurance for Prudential Insurance for 29 plus years. He recently completed his 50th year career as an Insurance professional. While selling insurance, Bruce obtained numerous certifications. In 1978, he joined the McAllen Fire Department, where he served as chaplain, and was an active volunteer until his death. He was active in the Texas State Fireman’s & Fire Marshal’s Association including being the Rio Grande Valley District Chaplin. Bruce was in civic organizations where he was a member of the McAllen Noon Lion’s Club as well as president of the chapter. Through the years, he was also a member in the McAllen Civitans and JC’s organizations. Bruce was a member of St.Paul’s Lutheran Church in McAllen since 1978. He was proceeded in death by his parents. He is survived by his wife of 50 years, Oleen Teer Covey of McAllen. His daughter, Marilyn Covey Randazzo and husband David of Pflugerville, TX. Son, Robert Covey and wife Mellissa Covey of Mt.Calm, TX. Son, Chad Covey of Mission, TX. He is also survived by his 5 grandkids: Katelyn and Alyssa Randazzo, Kyle and Makenzie Covey, and Chloe Covey as well as his sister Carol Covey and his loving stepmom, Billie Covey. A memorial service will be held Monday, June 11th at 10 A.M at St.Paul’s Lutheran Church, 300 W. Pecan, McAllen. In lieu of flowers, donations can be made to Texas Lions Camp, P.O. Box 290247, Kerrville, TX 78029-0247 or McAllen Fire Department, 201 N. 21st Street, McAllen, TX 78501.

The family of William Bruce Covey created this Life Tributes page to make it easy to share your memories.