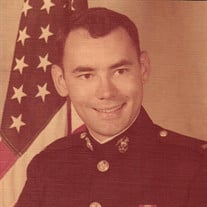 William Egil Corcoran, 73, lost his 23 year battle with Parkinson’s disease on April 06, 2019. Bill Corcoran was born December 24,1946 in Denison, TX, as the son of James Dennis Corcoran and Sarah Louise Corcoran. He is preceded in death by his parents, and his sister Rita and is survived by his loving wife, Mickey R. Corcoran; daughters Gina, Erin and Laura, three grandchildren, Darren, Dennis, and Daniela, his brother Patrick and sisters Mary, Bess, and Lynne. After earning a BA in History & Government in 1970 from North Texas University, he trained at Quantico, to later become a highly decorated 1st Lieutenant of the United States Marine Corps. Lt. Corcoran was cited for meritorious service while a member of Sub Unit One, First Air and Naval Gunfire Liaison Company from May 17, 1972 to March 14, 1973 in Vietnam. After three years of serving his country, he returned from the Vietnam war. He furthered his education at St. Mary’s University law where he became a member of Phi Delta Phi Fraternity and was published in the St. Mary’s Law Journal. Afterwards, he was admitted to the State Bar of Texas after swearing in ceremonies at Hidalgo County Courthouse at Edinburg to becoming a prominent lawyer for 25 years before being diagnosed with Parkinson’s. Visitation will be held Sunday, April 14, 2019, from 4 pm to 8pm with a rosary at 7pm at Kreidler Funeral Home. Graveside service will be Monday, April 15, 2018, at 11am at RGV Veterans Cemetery. In lieu of flowers, the family asks that donations be made to https://www.michaeljfox.org/get-involved/donation2.php

William Egil Corcoran, 73, lost his 23 year battle with Parkinson&#8217;s disease on April 06, 2019. Bill Corcoran was born December 24,1946 in Denison, TX, as the son of James Dennis Corcoran and Sarah Louise Corcoran. He is preceded in... View Obituary & Service Information

The family of William Egil Corcoran created this Life Tributes page to make it easy to share your memories.