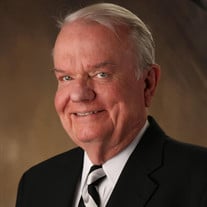 Willard Bailey Moon passed away peacefully at his home in McAllen, Texas, on July 1st 2021, just shy of his 83rd birthday. He was born in Odessa, Texas on July 10, 1938, to Aubrey and Lela Belle Moon where they later moved to Fort Worth. Willard was a 1956 graduate of Pascal High School and attended The University of Texas where he was a member of the Chi Phi Fraternity, a member of Alpha Delta Sigma and also served on the Student Government Committee. In 1960, after receiving his Bachelors in Journalism as an Advertising Major, Willard moved to Galveston, Texas where he started his professional career selling ads for The Galveston News Tribune. After a year, Willard moved to the advertising department of Leonards Department Store in Fort Worth, Texas where he worked for the next three years. In 1964, Willard was hired as an Account Executive at Glenn Advertising de Mexico, Monterrey, Nuevo Leon, Mexico. As a production manager, his main account was Cerveceria Cuauhtemoc (brewers of Bohemia, Carta Blanca, Tecate and other brands). While Willard was working in Monterrey, he was set-up on a blind date with Ana Maria Perez. After a short courtship, they were married in Monterrey in June 1966. In 1968, Willard took a position as Account Executive at Tracy-Locke Advertising in Dallas, Texas. He was hired to work on the Dole Banana Brand, Pearl Beer, Varo Electronics and LTV Aerospace. In 1972, Willard was promoted to Vice President, General Manager of Tracy-Locke Advertising. Willard was charged with the task of opening the San Francisco, California office to service the Dole Banana account which also added Dole Fresh Pineapple, Dole Fresh Mushrooms and Herfy’s Hamburgers. In 1978, Willard was made President of Point Communications in Dallas, Texas, a subsidiary of Tracy-Locke. The accounts that Willard served included Domino’s Pizza (Southwest Region), LTV Aerospace, Lone Star Gas, American Airlines (sales promotion) and many more. In 1992, after spending 32 years in advertising, Willard decided to semi-retire and became a franchisee of FASTSIGNS. Willard, along with Ana Maria, moved to McAllen, Texas and opened the doors of FASTSIGNS in October of that year. Together, they built the store to one of the largest in the FASTSIGNS system and were recognized for many years as PACESETTERS—the best of the best in FASTSIGNS system worldwide. In 2000, Willard took on a position within the FASTSIGNS corporate office as the Director of E-commerce. In 2007, Willard fully retired and began to serve on many boards including; McAllen Airport Advisory Board, Keep McAllen Beautiful, McAllen Chamber of Commerce, Museum of South Texas History, McAllen Citizens League, Valley Symphony Orchestra, McAllen Convention Center Advisory Board, Foresight McAllen Update Committee, Catholic Charities and Boy Scouts of America Rio Grande Council. Willard was a long-time Boy Scout who earned several awards including Eagle Scout, District Award of Merit and Silver Beaver. He also served as Membership Chairman of the North Trail District and was a Leader and Staff Member of the Basic Boy Scout Adult Leader Training Course. Willard also served on the Boy Scouts of America’s Marketing Committee for Circle 10 Council. Willard completed Advanced Boy Scout Adult Leader Training (Woodbadge) in Philmont Scout Ranch, he later became a Staff Member for Woodbadge Training, Circle 10 Council, Dallas, Texas. Willard is survived by his loving wife of 55 years, Ana Maria and their three children: Anita Moon; James Moon both of McAllen, Texas and Teresa Massey (James) of Brisbane, Australia. He leaves behind 6 grandchildren: Victoria McGee, her fiancé, Christian Ritchie, from Los Angeles, California; John Houston McGee, of McAllen, Texas; Madeline Moon of Fayetteville, Arkansas; Sebastian Moon of McAllen, Texas; Dean and Logan Massey, of Brisbane, Australia. Willard was preceded in death by his parents, Aubrey and Lela Belle Moon and his brother Aubrey Jr. The family would like to thank Dulce Esperanza Home Health and A Ray of Light Hospice as well as Julia Vasquez, Maria Dolores Jimenez, Evelia Cardoza, Jose V. Mendez, Maria and Mayela Gutierrez and Marisol Cedillo. In lieu of flowers, the family is requesting for donations to be made to the Museum of South Texas History or the Catholic Diocese of Brownsville. Visitation and rosary will be held on Tuesday July 6th from 5pm to 8pm at Kreidler Funeral Home. Funeral Mass at Our Lady of Sorrows Wednesday July 7th at 10am.

Willard Bailey Moon passed away peacefully at his home in McAllen, Texas, on July 1st 2021, just shy of his 83rd birthday. He was born in Odessa, Texas on July 10, 1938, to Aubrey and Lela Belle Moon where they later moved to Fort Worth. Willard... View Obituary & Service Information

The family of Willard Bailey Moon created this Life Tributes page to make it easy to share your memories.

Willard Bailey Moon passed away peacefully at his home in McAllen,...