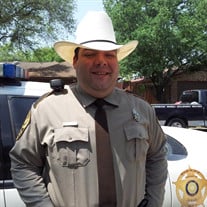 Walter Keith Wilemon Mcallen- Walter Keith Wilemon, 40, passed away to be in the arms of the Lord, this Friday, March 2, 2018, at Doctors Hospital at Renaissance. Walter was born on February 11, 1978 to Thomas Ferrell and Roble Almaguer Wilemon of McAllen. Walter was a 1997 McAllen High School graduate. Following in his father's footsteps, Walter started his career at the Hidalgo County Sheriff Jail as a Detention Officer. He later attended the Mission Police Academy graduating on October 6, 2011. He later became a Sr. Sheriff Deputy with the Hidalgo County Sheriff’s Department. Walter was an amazing man with a big heart of gold. He loved to help everyone and was loved in return. His passion for law enforcement made him an outstanding Deputy and respected by many. He loved his family and spent all his free time with them. He enjoyed traveling, going to movies, he had a love for Star Wars and the Dallas Cowboys. Walter’s unconditional kindness for others will always be in our memories. Walter will be sadly missed by everyone who loved and knew him. Walter is survived by his wife, Annette; sons, Wraith Kristopher Wilemon & Brandon Gonzalez; parents, Thomas Ferrell and Roble, all from Mcallen. Walter is also survived by his Grandmother, Sarah Katherine Wilemon; half sisters, Monica Coleman, Charlotte Reiland; half brother, Brian Wilemon all from Mississippi. He leaves behind numerous aunts, uncles, cousins, nephews, nieces and a grandniece. He is preceded in death by his paternal grandfather; Walter Ferrell Wilemon and maternal grandmother; Amada De Leon Almaguer. Visitations will be held at Kreidler Funeral home in McAllen from 6 pm to 8 pm with prayer at 7 pm on Sunday March 4, 2018. On Monday, March 5, 2018, a special procession will be provided by Hidalgo County Sheriff's department from Kreidler Funeral Home to Our Savior Lutheran Church. There will be an Honor Guard Presentation at Noon at Kreidler Funeral Home which will include a 21 Gun Salute, playing of Taps and a flag presentation. The Procession to the church will begin at 12:30 pm. Church Services will begin at 1:00 pm at Our Saviour Lutheran Church. No burial services will be held, Walter will be cremated.

Walter Keith Wilemon Mcallen- Walter Keith Wilemon, 40, passed away to be in the arms of the Lord, this Friday, March 2, 2018, at Doctors Hospital at Renaissance. Walter was born on February 11, 1978 to Thomas Ferrell and Roble Almaguer Wilemon... View Obituary & Service Information

The family of Walter K. Wilemon created this Life Tributes page to make it easy to share your memories.