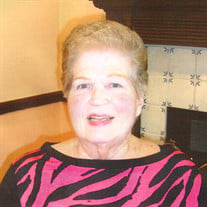 VONA LUE GREATHOUSE WALKER born February 26, 1937 peacefully passed away September 19, 2017. She was born in Nephl, Utah to John Earl and Leda Greathouse. Her mother passed away in 1949 and she was fortunate when her father married Nola N. Greathouse in 1950. Nola was her mother for 50 years until her death in 2000. Vona lived and grew up in the farming community of Lynndyl, Utah. She attended grade school in Lynndyl and Junior High and High School in Delta, Utah. After graduation, she attended Brigham Young University in Provo, Utah. In 1957, she moved to San Francisco where she worked at the National Headquarters of Bank of America for six years. In 1966, she moved to the Valley and worked for Hidalgo County and Hidalgo County Drainage District #1 from 1966 to 1998. Upon her retirement as Director of Right of Way and Manager of the Drainage District in June of 1998, she began working for the City of McAllen as Right of Way Coordinator. Her family was a priority with her, and she loved working and meeting people. For more than 20 years she was a Volunteer in the gift shop of the McAllen Medical Center. In 1959, she married Tommy Gene Walker, they later divorced. She is survived by two children, Carrie Sue and Gary (MaryLou) Walker of Pharr (Katy), TX ; as well as 6 grandsons, Travis Bacchi, Benjamin Schiff (Stephanie) and Daniel Grinnell, sons to Carrie Sue and Mario (Irma Torres), Damian Cavazos and Jimmy Villarreal (Brittney), sons to Gary and MaryLou; she also had 5 great grandchildren, Christian Chance, Isabella Rene, Mario Alejandro Cavazos and Peyton James, Parker James Villarreal. She is survived by two brothers, Don Earl (Carolyn) Greathouse of Clearfield, Utah and Gregory John (Mary) Greathouse of Lynndyl, Utah and 11 nieces and nephews. Services will be conducted by Kreidler Funeral Home at 314 N. 10th Street McAllen, on Saturday September 23rd from 9-11am visitation with a graveside service to follow at Valley Memorial Gardens.

VONA LUE GREATHOUSE WALKER born February 26, 1937 peacefully passed away September 19, 2017. She was born in Nephl, Utah to John Earl and Leda Greathouse. Her mother passed away in 1949 and she was fortunate when her father married Nola N. Greathouse... View Obituary & Service Information

The family of Vona Lue Walker created this Life Tributes page to make it easy to share your memories.