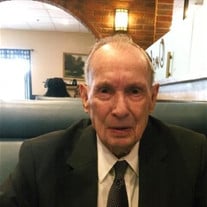 Virgil William (Bill) Watkins passed away at the age of 92 on May 8, 2019 in McAllen, Texas. Born in Mercedes, Texas on January 4, 1927, Virgil had lived in McAllen for the last 46 Years. He was preceded in death by his wife of 64 years, Martha Jane Adams Watkins; a sister, Juanita Lavigne; his parents Harley V. Watkins and Callie Deal Watkins; and grandson, Brian Watkins. Virgil is survived by son and daughter -in law Gary and Carolyn Watkins of Georgetown; daughter and son-in-law Peggy and John Baldwin; daughter Debbie Tyrrell; son Billy Bob Watkins; and daughter and son-in law Sandy and Barry Ehlinger, all of McAllen. He is also survived by grandchildren Brandon Watkins of Austin; Michael Baldwin (Stephanie), Julie (Ian) Minnis; Jeffrey (Betsy)Baldwin; Cheri (David) Moceri; Jonathon (Natalie) Tyrrell; Kenneth (Juri)Tyrrell, all of San Antonio; Laura (Nathan)Fronczek of Richmond, Virginia; Baylee Ehlinger and Callie Ehlinger of Corpus Christi, and Grant Ehlinger and Taylor Ehlinger of McAllen; and twelve great-grandchildren. Before graduating in 1944 from Mercedes High School, Virgil led the Mercedes Tigers as football quarterback and participated in basketball, baseball, track, Band,and the Glee Club. He served in the Navy aboard the USS Columbia during WWII in 1945-1946. Virgil attended Edinburg Junior College. As the Assistant Supervisor at the Mission location of Halliburton Oil Services, Virgil retired after 40 years of service in Mission, Refugio, and Falfurrias. A member of the Masonic Lodge #851 in Mission for over 50 years, Virgil had also been a member and past president of the American Petroleum Institute. He additionally volunteered as a Little League coach. Virgil was an avid fisherman, hunter, bowler, and golfer, having participated in many API Golf Tournaments. Virgil attended Calvary Baptist Church in McAllen. A viewing will be held at Kreidler Funeral Home at 314 N. 10th St. from 5:00-8:00 P.M. on Monday, May 13th. Funeral services will be held at Calvary Baptist Church at 1600 Harvey Drive in McAllen at 11:00 A.M. on Tuesday, May 14th with interment to follow at Rio Grande Valley State Veteran’s Cemetery at 2520 S. Inspiration Road in Mission at 1:00 P.M. Pallbearers will be grandsons Brandon Watkins, Michael Baldwin, Jeffrey Baldwin, Kenneth Tyrrell, Jonathon Tyrrell, and Grant Ehlinger. In lieu of flowers, the family suggests donations be made to Comfort House at 617 Dallas Ave. 78501 in McAllen; American Cancer Society, or a charity of your choice. A loving father, grandfather, great-grandfather, friend, and American Veteran, Virgil will be remembered for his hard work ethic, sharp wit, and gentle soul.

Virgil William (Bill) Watkins passed away at the age of 92 on May 8, 2019 in McAllen, Texas. Born in Mercedes, Texas on January 4, 1927, Virgil had lived in McAllen for the last 46 Years. He was preceded in death by his wife of 64 years, Martha... View Obituary & Service Information

The family of Virgil William(Bill) Watkins created this Life Tributes page to make it easy to share your memories.

Virgil William (Bill) Watkins passed away at the age of 92 on...