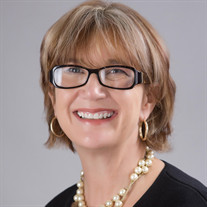 VALORIE CANNEY GLASS, 64, was born on May 5, 1952 in Amarillo, Texas and passed away Monday, March 27, 2017 after a 15-month battle with cancer. She is survived by her husband, George Hodges Glass; her daughters and their husbands, Lindsey and Ryan Kinkade and Allison and Lane Gaddy, her grandsons Desmond and Anson, and several family members and friends who provided care and support throughout her full life. Valorie graduated from the University of Texas with a Bachelor of Arts with honors. She married her husband, George Glass, on December 14, 1980 at the Chapel by the Sea in South Padre Island, Texas, where she subsequently taught for several years in public schools and later obtained a Masters of Education from Pan American University. She then earned her law degree from the University of Texas School of Law, with honors, interning with Texas Supreme Court Justice Nathan Hecht prior to graduation. She received her Board Certification in Labor and Employment Law from the Texas Board of Legal Specialization and was a member of the College of the State Bar of Texas. Valorie was a partner at Atlas, Hall & Rodriguez law firm, where she worked for more than 20 years. She had recently been honored and named as a Fellow to the American College of Labor and Employment Lawyers and is a member and a past Chair of the Labor and Employment Section of the Texas State Bar. She was passionate about her career. Valorie was an active member of the community; serving as the current board president of Easter Seals RGV and participant as a board member of the Texas Association of Business. She was involved at St. John’s church in McAllen, where she frequently taught Sunday school. Valorie was a driven professional with an avid love of traveling the world with her husband and girls. She remained a brave, iron-willed woman, even throughout her final months and was an inspiration to many. A remembrance will be held on Friday, April 7th at Kreidler Funeral Home in McAllen, Texas from 4-6 pm with a service on Saturday morning, April 8th, at Chapel by the Sea on South Padre Island (10:00am); all are welcome and encouraged to bring photos of their favorite memories with Valorie. In lieu of flowers, please send a donation to Easter Seals Rio Grande Valley, or charity of your choice.

VALORIE CANNEY GLASS, 64, was born on May 5, 1952 in Amarillo, Texas and passed away Monday, March 27, 2017 after a 15-month battle with cancer. She is survived by her husband, George Hodges Glass; her daughters and their husbands, Lindsey and... View Obituary & Service Information

The family of Valorie Glass created this Life Tributes page to make it easy to share your memories.