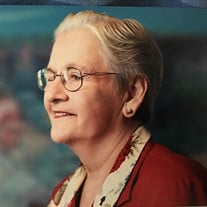 Tuts Curl, of McAllen, passed away on September 8, 2016, surrounded by her loving family. She was born in Donna Texas to Dale and Margia Washburn. Tuts graduated Donna High School, and then attended Pan American University for two and a half years, and graduated from North Texas State College with her teaching certificate in 1960. She spent most of her adult life teaching Junior High, sharing her love of Texas history at Denton Jr. High, St. Joseph's School in Edinburg, and B.L. Gray Jr. High in Sharyland. After retiring from teaching, she stayed active with book clubs, Edinburg Senior Service League and Pan American Round Table. Her husband of 57 years, Don R. Curl, her son Phillip Curl and his wife Cindy of Bryan Texas, her daughter Tricia Osborne and her husband Chris of Georgetown Texas survive her. Tuts also has four grand children, Kristen, Robert, Emalee, and Carter, as well as four great grand children, Keisha, Robyn, Lydia, and Deacon. Tuts had a life-long love of dogs and horses, having lovingly owned several in her life. She especially loved Morgan horses. One in particular, Locklynn, was a prize that she won in an essay contest from the Morgan Horse Association while she was a young teenager. Tuts trained Locklynn herself to harness and saddle and rode her all around Donna. Even to the movies. In 1958, Tuts sold her best friend Locklynn, to attend North Texas State for a semester. This is not the end of the Story! Years later, Don found out that Locklynn was still alive in California. The lady who owned Locklynn offered to give the horse back to Don if he wanted her. Don paid to have Tuts’ best friend returned. Tuts and Locklynn were reunited again. Tuts’ love of horses was passed on to both of her kids. Phillip and Tricia both rode Hunter/Jumper’s for years and the family travelled statewide for competitions. Don and Tuts moved back to Edinburg in 1964. In the late 60’s, Tuts and a friend established the Candy Stripers at Grand View Hospital in Edinburg. While teaching full time, Tuts also became a member of the Junior Service League, Beta Sigma Phi Sorority, Pan American Round Table, and was a Trustee at the Hidalgo County Historical Museum. In the early 70’s, Don and Tuts acquired a female German Shepherd named Flecha. This was the start of their love of German Shepherds. For the next 45 years Flecha’s bloodline was active at the Curl home. Teacher, Wife, Mother, Grandmother, Great Grandmother and friend. Tuts’ influence on the people around her and the people she touched will be remembered fondly, and she will be greatly missed.

Tuts Curl, of McAllen, passed away on September 8, 2016, surrounded by her loving family. She was born in Donna Texas to Dale and Margia Washburn. Tuts graduated Donna High School, and then attended Pan American University for two and a half... View Obituary & Service Information

The family of Tuts Curl created this Life Tributes page to make it easy to share your memories.