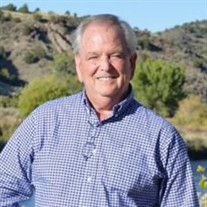 Tony Jim Corso, 71, passed away peacefully in his sleep on April 23, 2021, while on a short trip to Fredericksburg, Texas with his wife, Suzanne. He was a lifelong resident of McAllen and the Rio Grande Valley, the Corso family having farmed north of Trenton Road and west of Lake James since great-grandparents Vincenzo and Naomi Corso settled there from northern Italy in the early 1920s. He is the oldest child of Joe Vincent and Shirley Corso, followed by siblings Joe, Jr. and Ann. In 1978, he married Suzanne after a nine-year courtship and they celebrated their 43rd wedding anniversary this spring. Tony graduated from McAllen High School in 1968 where he excelled in science, even advancing to The International Science and Engineering Fair in Detroit, Michigan in 1968. He then attended Texas A&M University in College Station as a member of the Corps of Cadets and the Fightin' Texas Aggie Band as a trumpet player. He graduated in 1972 with a degree in Industrial Engineering and returned to the Valley to work for Reynolds Manufacturing for the next thirteen years as a development engineer, designing equipment for Caterpillar, John Deere, and Reynolds products and advancing to Vice President. In the 1980s, he worked for the Mitsubishi Corporation in Matamoros, Mexico, before venturing into self-employment when he bought a small printing shop in Kerrville, Texas, determined to learn that industry from the ground up. He also started Advanced Graphics where he did consulting work and independent publishing. In 1994, he and Suzanne started Rio Vincenzo Orchards, shipping citrus fruit all over the United States, and in 1996, he and his partners opened Copy Zone, a printing business on the corner of Nolana and North 10th Street. He sold the shop in 2017 and retired in 2018, returning to the soil with multiple gardens as well as construction and landscaping around the property, but he never quit working on projects for clients and friends in the community. The progress of McAllen and conservancy of the natural beauty and resources of the Rio Grande Valley were always important to him as was the Valley Land Fund, Futuro McAllen, the Hidalgo-Starr County A&M Club, and the Association of Former Students. He believed in the opportunities and potential the Valley held for its residents, new and old, to thrive both economically and socially, but he also was committed to preserving the unique culture of deep south Texas and was proud of its people and heritage. He had many, many longtime friends from all walks of life including the agricultural, religious, and business sectors, but a lot of people gained a deep respect and admiration for him due to simply being a good listener and a caring, kind person. He was also very funny and had a deadpan sense of humor that grew more vivid the more he got to know someone. Both at home and work, Tony remained a lifelong learner. Machines were puzzles he loved to break apart, solve, and put back together in a more efficient way. He was a voracious reader of everything from science to religion, from politics to history, and even cryptozoology and unexplained phenomena such as extraterrestrial life. Hunting had also been a seasonal pastime to enjoy with family and close friends starting in boyhood, although he derived more pleasure from driving around the brush country, taking photos of nature, and shooting the breeze with old pals. Ultimately, his greatest joy came from family time with Suzanne and their adult children and pets. Tony and Suzanne enjoyed exploring the American Southwest, especially west Texas, northeastern New Mexico, and southern Colorado. Frequent trips to Aggieland for football games and other campus events were also a way for the family to meet up and cheer on the greatest marching band in the world. He was a man of great faith and relied on his relationship with God to guide his leadership in family and the workplace. Tony is survived by his loving wife of forty-three years, Suzanne, and children: daughter, Brooke Ellen, of Houston; son, David Ryan, of Tomball; son and daughter-in-law, Joshua Grant and Courtney Brooke, of Houston; and furry companion, Cameron, of McAllen. He is also survived by his brother, Joe V. Corso, Jr. (June), of Kerrville; nephew, Jim Corso (Brittany) of Kerrville; niece, Mandy Corso Krause (Travis) of D'Hanis; sister, Ann Corso (Gary Brown), of Georgetown, niece Katy Vajdak Bohls (Justin), of Georgetown, and nephew Joe Vajdak, of Georgetown. He is also survived by brother-in-law, Stanley Kidd (Carlynn), of Tawas City, MI; nephew, Travis Kidd; niece, Tiffany Kidd; brother-in-law, Clay Kidd, of Luling; sister-in-law, Katie Lindsey (Kelly), of Wesley, AR; nephew Kelly Lindsey, Jr. (Robyn); niece Candace Giffin (Anthony); niece Miranda Horstman (Jared); niece, Laura Gahr (Zachary); niece, Heather Holiday (Colton); and several great-nieces and great-nephews. He is preceded in death by beloved parents Joe V. Corso and Shirley J. Corso of McAllen, and family dogs, Buster and Caesar. A service celebrating Tony's wonderful life will be held at Kreidler Funeral Home (314 N 10th St. McAllen, TX 78501) on Saturday, May 8, from 2pm-4pm. If friends and family would like to bring a small card with a funny or sweet story about Tony to the service, the family will collect them in a basket for a remembrance scrapbook. Memorial contributions can be made to the Texas Aggie Band Association/Corps of Cadets Association at 1134 Finfeather Road, Bryan, TX 77803-3823 (877-892-4222).

Tony Jim Corso, 71, passed away peacefully in his sleep on April 23, 2021, while on a short trip to Fredericksburg, Texas with his wife, Suzanne. He was a lifelong resident of McAllen and the Rio Grande Valley, the Corso family having farmed... View Obituary & Service Information

The family of Tony Jim Corso created this Life Tributes page to make it easy to share your memories.

Tony Jim Corso, 71, passed away peacefully in his sleep on April...