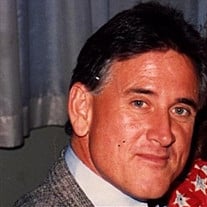 Former McAllen resident, Thomas Watson Moore II, passed away on Sunday, April 22, 2018 in Lubbock, Tx., after a lengthy illness. He was born in McAllen, Tx. on October 9, 1952 and graduated from McAllen High School. Thomas was also a graduate of the University of Texas at Austin, where he was a member of the Phi Gamma Delta (Fiji) fraternity. Years later he married and relocated to Lubbock, Tx. a city he called home for the rest of his life. Thomas was known for his love of hunting, fishing and the great outdoors. He was an avid gun collector and a darn good shot. With the exception of firearms, ammunition and antlers, Thomas cared nothing for material possessions. He did, however, deeply love God, his son and his country. He was a staunch supporter of the U.S. Constitution and a true American patriot. Thomas was preceded in death by his parents, Samuel Bryan Moore, Sr. and Gloria Steinhagen Moore; and his brother, Daniel Andrew Moore, all of McAllen. He is survived by his son Thomas Jackson "Jake" Moore of Austin; his sister Ruth Moore Roberts and husband Greg, of Arlington, TX; and his brother S. Bryan Moore, Jr. and wife Janet, of Lakewood, Colorado. Thomas' family would like to extend their gratitude to Hospice of Lubbock and to Ms. Glenda Mooney, in particular. Her kindness, care and support greatly prolonged Thomas' life. For that they will be eternally grateful. The family would also like to recognize Thomas' loyal friend, David Acuff, who selflessly helped Thomas and his family throughout his illness. A family visitation will be held on Friday, April 27, 2018 from 6:00-8:00 p.m. at Kreidler Funeral Home, 314 N. Main St. in McAllen, Tx. A graveside service officiated by Bro. Shannon Talley of the First Baptist Church of McAllen is scheduled for Saturday, April 28 at 11:00 a.m. at Roselawn Cemetery, 1201 N. Main St. in McAllen. In lieu of traditional rememberances, donations made be made to Hospice of Lubbock or the First Baptist Church of McAllen.

Former McAllen resident, Thomas Watson Moore II, passed away on Sunday, April 22, 2018 in Lubbock, Tx., after a lengthy illness. He was born in McAllen, Tx. on October 9, 1952 and graduated from McAllen High School. Thomas was also a graduate... View Obituary & Service Information

The family of Thomas Watson Moore II created this Life Tributes page to make it easy to share your memories.