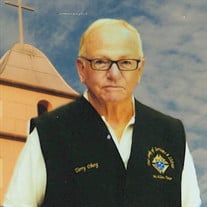 Terrence J. Oberg, 77, passed away on March 22,2022 at Amara Hospice after a valiant fight with cancer. The only child of Charles and Pauline Oberg, Terry was born in White Plains, New York. The family moved to Texas when Terry was a young child and McAllen quickly became home for Terry. He received his undergraduate and Masters Degrees from Pan American College and later received his Doctorate Degree from Texas A&M University. Terry was a very proud Texas Aggie. His loyalty to the Aggies was one of his endearing trademarks. To know Terry was to know and appreciate his loyalty to Texas A&M, a room temperature Dr. Pepper, and a good Hershey chocolate. Terry was an educator. He began his teaching and coaching careers in the Sharyland Schools in the late 60's. He went on to serve as administrator of several schools in the Premont, Texas area, He was a very active and beloved official for football, basketball, baseball and softball for many years. After retiring from education, Terry continued to officiate. He was passionate and dedicated to his love for all sports and stayed on the field as long as he could. lt was shortly before he was admitted to Amara that he officiated his last game. Those who knew Terry well, knew that he was a man of strong convictions. He was a Pro-Life advocate and fought tirelessly for his causes. He joined his friends in praying the Rosary for the unborn children every Friday morning. He served on the Board of Directors for the McAllen Pregnancy Center. Terry was also a man of very strong faith. He dedicated his entire life to constant prayer and selfless service to The Lord. He was a member of Our Lady of Sorrows Catholic Church and served his parish in every capacity. He was an active Knight of Columbus, Master of Ceremonies, CCD lnstructor, publisher of the weekly parish bulletin, and honorary member of The Legion of Mary. He also was involved in the Worship and Education Commissions. Terry became the do-all sacristan and made sure that everything at the Parish ran smoothly. He kept watch of liturgies, services, supplies, policies, procedures, and much more - all in his own special and humble way. Our Lady of Sorrows Parish Community deeply misses his daily presence. A heartfelt expression of gratitude to Dr. Joseph Caporusso, Deacon Johnny Gonzalez, and Amara Hospice for their devoted care and attention to Terry. Visitation will be Friday, March 25, 2022 from 6-9pm , with a rosary at 8pm, at Our Lady of Sorrows Church. Funeral mass will be at 9 am Saturday, March 26 at the church. ln lieu of flowers, memorial donations may be made in Terry's name to Our Lady of Sorrows Church. 1108 W. Hackberry, McAllen, TX 78501.

Terrence J. Oberg, 77, passed away on March 22,2022 at Amara Hospice after a valiant fight with cancer. The only child of Charles and Pauline Oberg, Terry was born in White Plains, New York. The family moved to Texas when Terry was a young child... View Obituary & Service Information

The family of Terrence J. Oberg created this Life Tributes page to make it easy to share your memories.