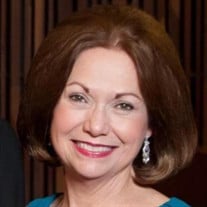 MCALLEN - Susan Parker Miller was called home by the Lord on June 9, 2020, at the age of 70. She was born November 26, 1949 in Dallas, Texas to Jack and Faye Parker and was the youngest of six daughters. Susie grew up in Dallas and attended Woodrow Wilson High School. After graduation, she enrolled at Baylor University in Waco, where she earned a Bachelor of Arts degree with honors in political science and a minor in speech communication. During college, she participated in a variety of activities including serving as president of the Alpha Omega sorority and joining Angel Flight, a community service and leadership development organization. While at Baylor, Susie enrolled in World Campus Afloat, a study abroad program where she created many fond memories during visits to ports across southern Europe, northern Africa and South America. Shortly after returning from the semester at sea program, Susie was introduced to John Miller, from Mission, on a blind date to Alpha Omega's annual Fire Dance and their courtship began. They were married August 14, 1971, in Dallas at the Northridge Presbyterian Church. After marriage, she began her career teaching political science at MacArthur High School in Irving. She was a natural educator who loved the students and shared her passion for learning with them. In 1976, she and John relocated to McAllen and it didn't take long for Susie to become an active member of the community. Initially volunteering as a docent for the International Museum of Art and Science (IMAS) and later joining the McAllen Junior League - where she served as President from 1989-1990. These connections provided her the opportunity to meet people and give back to the city she called home. Education was always in her heart and as her children grew, she focused her time and energy teaching those values to them. She served as the president of the Milam Elementary PTA and volunteered as a room parent at both Milam and McAuliffe Elementary Schools. In 1990, she was elected to the McAllen ISD School Board of Trustees and served for six years - including one as president in 1992. She later furthered her education and obtained a master's degree in speech communication from the University of Texas - Pan American. Following her master's program, she became Director of High School to University Services at UTPA, managing programs that enabled students to pursue academic achievement in preparation for college and beyond. Serving her community schools and UTPA, she positively impacted the lives of many of South Texas's future leaders. Susie was a long-time member of the First Presbyterian Church in McAllen. There, she was a Sunday school teacher, a leader in vacation Bible school, and an elder of the church. She had a life-long joy in studying the Bible and Susie's strong faith in God was instrumental in how she lived. She viewed each day as a gift from God and considered herself and her family truly blessed. She will always be remembered for her generosity and the combination of graciousness and perfection by which she approached life. Whether hosting cheerful family get-togethers, sending carefully coordinated treat packages to her grandchildren or baking trays of flawlessly presented Christmas cookies, she was meticulous, thoughtful and loved pleasing others. Susie was preceded in death by her parents and two sisters, Shirley Wagner and Joan Caldwell. She is survived by her devoted husband of 48 years, John, and their two children: Jeffrey (Lesley) Miller and Natalie (Grant) Mueller. She was blessed with five grandchildren: Jack Miller, Marshall Miller, Paige Miller, Evelyn Mueller and Johnathan Mueller. She is also survived by sisters Patricia (Dr. Lynn) Ferguson, Nancy Weldon, and Carol Gray; and many nieces and nephews. In lieu of flowers, the family suggests gifts to the Building Fund of the Genesis Presbyterian Church, P.O. Box 1422, Mercedes, TX 78570 or to a Rio Grande Valley charity of your choice. A private family service will be held under the direction of Kreidler Funeral Home in McAllen.

MCALLEN - Susan Parker Miller was called home by the Lord on June 9, 2020, at the age of 70. She was born November 26, 1949 in Dallas, Texas to Jack and Faye Parker and was the youngest of six daughters. Susie grew up in Dallas and attended... View Obituary & Service Information

The family of Susan Parker Miller created this Life Tributes page to make it easy to share your memories.

MCALLEN - Susan Parker Miller was called home by the Lord on...