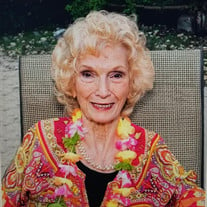 Sue Holland Moore entered eternity with her precious Lord and Savior on March 6th, 2018 in San Antonio, TX after a brief illness. She was born Margie Sue Hinds to George and Cara Hinds in Poteau, OK on October 23, 1927 and was the youngest girl of eight siblings. Sue was an amazing, beautiful, elegant woman who was warm and kind to everyone. Many knew her from her successful career as a major force in the cosmetics business having owned and operated several Merle Norman Cosmetic studios across the Valley. It was uncommon in her era to be a female entrepreneur, but she blazed a trail and achieved numerous awards and recognitions for her endeavors. Her store in La Plaza Mall achieved national recognition as number one in the nation. Another accomplishment was serving on the Board of Directors of Merle Norman Cosmetics. Sue also contributed to her community. She served on the Board of Directors for the McAllen Spring Fiesta, was a lifetime member of Beta Sigma Phi and served as a Sunday School teacher at her church home, Calvary Baptist Church. She was preceded in death by her siblings, her beloved son Steve Holland and husbands, Ed Holland and Louis Moore. She is survived by her children Craig Holland, Mike Holland (Melissa), Cindy Holland-Rodriguez (Joe), grandchildren Chris Holland (Alicia), Justin Holland (Barbara), Brian Holland (Amanda), Kimberlie Holland, Jonathan Holland, Cameron Holland, Pamela Rodriguez, Andrea Rodriguez, Steven Rodriguez and niece Debbie Dubert. She also leaves behind her great grandchildren Shelby Holland, Laci Sue Holland, Jacob Holland, Riley Holland and Harrison Hovis. Sue lived a full and beautiful life that impacted all who were fortunate to know her. Visitation will be held Thursday, March 8th from 6-8pm at Kreidler Funeral Home. A funeral service will be held at 1:00 pm, Friday, March 9th at Calvary Baptist Church with burial to follow at Roselawn Cemetary. The family would like to extend their gratitude to her loving caregivers Socorro Torres, Blanca Ramirez, the staff at VITAS Health Care and By Design Home Care. In lieu of flowers donations may be made to Shriners Hospitals for Children. “For God so loved the world that he gave his one and only Son, that whoever believes in him shall not perish but have eternal life.” John 3:16

Sue Holland Moore entered eternity with her precious Lord and Savior on March 6th, 2018 in San Antonio, TX after a brief illness. She was born Margie Sue Hinds to George and Cara Hinds in Poteau, OK on October 23, 1927 and was the youngest girl... View Obituary & Service Information

The family of Sue Holland Moore created this Life Tributes page to make it easy to share your memories.

Sue Holland Moore entered eternity with her precious Lord and...