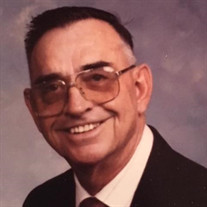 Stanley Leroy McMahon, Jr., age 86, passed away on Tuesday, March 13, 2018, at Treviso Transitional Care in Longview, Texas. He was born on January 6, 1932 in Meadville, Pennsylvania, to the late Stanley Leroy McMahon, Sr. and Helene Winters McMahon. He was preceded in death by his parents as well as his siblings, David Marshall McMahon and Gloria McMahon Seitz. Stanley married Celestine Rose Doffing on December 21, 1952 in Mission, Texas. He is survived by his wife of 65 years; three children, Michael (Diana) McMahon of Longview, Texas, Ann Johnson of Wimberley, Texas and William (Jeannine) McMahon of Covington, Tennessee; grandchildren, Hope McMahon, Thomas (Andrea) McMahon, Hannah (Tyler) Lindsey, Chloe McMahon, Gunnar McMahon, Katie Rose Johnson and numerous nieces and nephews. After graduating from Meadville High School, he moved to Mission, Texas to help construct his parents’ home. His parents moved to Mission in 1951. He enlisted in the U.S. Navy in May 1952 and served his country for four years. He was stationed at the Naval Air Station in Norman, Oklahoma and in 1953-1955 he served aboard the USS Kearsarge, an aircraft carrier in the Korean War. He was honorably discharged in 1956. He and Celeste returned to Mission, Texas where he was employed by the Mission Post Office. He faithfully worked there for 38 years and retired in 1994. They moved to Longview, Texas in March of 2015 to be closer to their family. A Funeral Mass will be held at 10:00 AM on Friday, March 16, 2018, at Saint Paul’s Catholic Church in Mission, Texas with Reverend Patrick Seitz officiating. A graveside service will be held on Friday, March 16, 2018 at 1 PM at Rio Grande Valley State Veterans Cemetery, 2520 Inspiration Rd, Mission, TX. In lieu of flowers, please donate to the charity of your choice. Kreidler Funeral Home is in charge of arrangements.

The family of Stanley Leroy McMahon Jr. created this Life Tributes page to make it easy to share your memories.