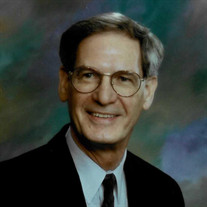 Stafford William Burroughs of McAllen, Texas, passed away on Tuesday, February 11, 2020, at the age of 84. Stafford was born in Bedford, Virginia, on August 9, 1935, to Nelson and Susie Burroughs. The Burroughs family moved to West Virginia when Stafford was young, and shortly after graduating from East Bank High School in 1953, Stafford began his banking career. He earned his BS degree in business administration from West Virginia State College while working full time and later graduated from the National Trust School at Northwestern University. A trust officer for over 40 years, Stafford provided invaluable assistance and counsel to many families, foundations and institutions and strove to know his clients on a personal level. Stafford also volunteered many hours of service to numerous civic organizations in West Virginia and Texas while working at The Bank of West Virginia, Texas Commerce Bank and BB&T before retiring in 2002. Stafford’s family was his true passion. He married Jacqueline Isaacs on August 30, 1956, and they raised two daughters, Tracey and Stephanie in St. Albans, West Virginia. Stafford loved learning and knowledge and valued a good biography. He was an avid, if not skillful, golfer, who enjoyed the comradery of the foursome much more than the game. He travelled with his “Over Sixty Gang” to New Zealand, Canada and Europe. After Stafford retired, he would spend many hours tending his yard after neighborhood walks with his grand-dog, Max. Although Texas’ weather suited Stafford just fine, he was a West Virginian at heart. Stafford is survived by his wife, Jacqueline, his daughter Tracey Twenhafel (Mark), both of McAllen, Texas, his grandchildren, Tess Reyes and Trace Peyton of Katy, Texas, and Jacob Reyes of Edinburg, Texas, and his sisters, Katherine Smith of South Charleston, West Virginia, Donna Taylor of Virginia Beach, Virginia, and Geraldine Williams of Sunrise, Florida. He is preceded in death by his parents, Nelson and Susie Burroughs, his daughter, Stephanie Peyton, his brothers D.E. and Bobbie Burroughs, and his sister, Marguerite Ramsey. A memorial service remembering and celebrating Stafford will be held on Thursday, March 5, 2020, at 10:00 a.m., at the First United Methodist Church, 4200 N. McColl Rd., McAllen, Texas. In lieu of flowers, the family requests that Stafford be remembered through donations to the First United Methodist Church, 4200 N. McColl Rd., McAllen, Texas 78504, or to Easter Seals Rio Grande Valley, 1217 West Houston Ave., McAllen, Texas 78501.

Stafford William Burroughs of McAllen, Texas, passed away on Tuesday, February 11, 2020, at the age of 84. Stafford was born in Bedford, Virginia, on August 9, 1935, to Nelson and Susie Burroughs. The Burroughs family moved to West Virginia... View Obituary & Service Information

The family of Stafford William Burroughs created this Life Tributes page to make it easy to share your memories.

Stafford William Burroughs of McAllen, Texas, passed away on...