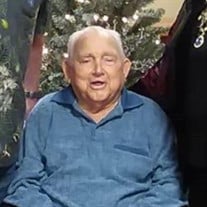 Sidney Lee Payne, Jr., loving spouse, father, grandfather, great grandfather, brother, friend & 2nd Division Korean War veteran, left this world to be with his Lord on July 9, 2020 He was born to Sidney & Roberta Payne in Eagle Lake, MS. He was the 3rd of nine children raised on a farm in Franklin Parish, LA. In 1950 he married a beauty named Joyce Dean Hicks and would have been married 70 years on October 19th. Soon after marrying Joyce, Sid was drafted and proudly served his country during the Korean War. He made many lasting friendships and memories during this time that he cherished until his death. He always let Joyce know she was serving in the war along side of him at home. Sidney began his career with Sun Oil Company in Delhi, LA in 1953. Later he was transferred to McAllen, TX where he was able to retire in 1989. During his 36 year oil field career he made many lifelong friendships. Sidney was a long time, proud resident of the Rio Grande Valley and in his younger years there was nothing he loved more than hunting and fishing with his many friends. Sidney loved Valley citrus and vegetables. He picked many oranges, grapefruit, tomatoes and other vegetables for family and friends over the years. Touching God’s dirt made our dad feel whole. It was difficult for him to drive by a fruit stand. Sidney was a kind, generous man who loved his Lord and his family. There was never a doubt that he was the head of our household. It was very important for him to talk to his girls on the telephone frequently to know they were safe, encouraged and capable of any task. Sidney had a great sense of humor, adored by all of us who had the pleasure of knowing & loving him. He had a great laugh and a twinkle in his eye that we will all greatly miss. Sidney was preceded in death by Joyce Payne, the love of his life; his parents and siblings Paul, Charles, Jerry, Helen, Barbara, and Anita Faye. He is survived by his three wonderful daughters and sons-in-law, Vicki Rainwater (Jack), Kathy Phillips (Cody) & Rebecca Macha (James). Four grandchildren, Elizabeth Baggs (Adam), Rebecca Galvan (Danny), Wilson Macha & Sydney Macha; five great grandchildren, Parker & Preston Galvan, & Anna, John & Wyatt Baggs; brother, Perry (Florice) Payne and sister Elaine Merryman (Jim). Funeral Services will be private service for immediate family. In lieu of flowers the family request that memorial donations be made to the First Baptist Church, 600 South Kansas Ave., Weslaco, TX 78596

The family of Sidney Lee Payne Jr. created this Life Tributes page to make it easy to share your memories.