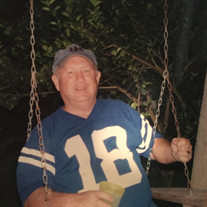 McAllen: Scott Barryman Smith also known as; Dad, Scotty, Pappa, Smitty, Pappasan, Smith and the infamous Fan Man passed on February 23, 2016 at home in McAllen, TX. He was born in McAllen, TX on February 3, 1941 to Elmer Harris Smith and Earl Leone Scott. He is survived by his loving wife, Linda Smith; his children, Jess and Arlene Smith, Scott & Patricia Smith, Marian Smith, Laurie Ahlman, Shelly Ahlman-Hollums, Lucas & Eliza Ahlman, Lance Ahlman, and Mayra & Joel Olivarez; grandchildren, Tristan & Taryn Smith, Thadeus Smith, Jess Mailloux, Samantha, Reagan, & Bear Olivarez, Riley, Jack, Zoey & Trenton Ahlman, Sydney, Landry, & Tyler Hollums, & Addison Cox; and pets, Tuggy, Dolly, Bitzy, Minnie, & Mickey. Scotty graduated from McAllen High School in 1959 and went on to serve four years in the United States Marine Corp reaching the rank of a corporal and was honorably discharged. He went on to attend Pan American University and graduated in 1967. He was a successful commercial realtor for over 35 years and an avid collector of antiques. He had one of the biggest private collections of antique fans dating as far back as the late 1800’s. His love for antiques was not only for fans but for coke machines, ice boxes and a great deal of many other antiques. He will be missed greatly by family, friends and anyone else that had the honor to meet this wonderful man who loved life. In lieu of flowers, please make a donation in his name to Cinderella Pet Rescue or take time to go donate blood at your local blood services. Graveside funeral services will be held on 2:00 p.m., Monday, February 29, 2016 at Roselawn Cemetery. All are invited to a gathering to remember the amazing life of Scotty afterwards at 4p.m. @ The Centennial Club located at 1410 Austin Ave, McAllen, TX, 78501.

The family of Scott Smith created this Life Tributes page to make it easy to share your memories.