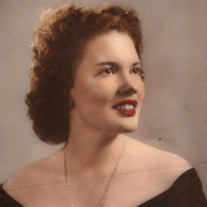 : Sarah Davis McGuyre, 89, of McAllen, Texas, passed away peacefully on Thursday, February 4, 2016. Born January 1, 1927, at her Grandmother McCabe's house on the Divide ranch, she was the daughter of the late A.B. and Pearl (McCabe) Sheppard. She is survived by her two daughters, Cynthia (Davis) Garzonie and her husband, Larry Garzonie of McAllen, TX and Phyllis (Davis) Adkins of Harlingen, TX; a brother, Floyd Sheppard (Billie) of San Angelo, TX; four grandchildren, Audie Baker, Joe Garzonie (Charity), Ty Adkins and Sara Adkins; and six great-grandchildren, Garrett, Bella, TJ, Mason, Aras, and Silas. We also want to acknowledge Joy DeKock, Sarah's "adopted" daughter. Her parents, first husband, Ty Davis, and second husband, Bruce McGuyre, preceded her in death. Sarah was the first female pilot in Coke County at the age of 18. While attending Sul Ross College she met Ty Davis and they married on August 23, 1947. Sarah and Ty loved to square dance and taught square dancing in the Sun Oil community where they lived and worked until moving to the Rio Grande Valley. Sarah had been a homemaker in West Texas until the move to Mission, TX. It was at this time she began working at the Mission Jr. High Library. They loved to travel, spending their Summer vacations for 11 years in Red River, New Mexico. She was known for her vivacious laugh, sense of humor, love of friends and family, and kindness. Her strength of character and positive attitude was apparent as she struggled with Parkinson's Disease for over 25 years. She loved the great outdoors and was an avid hunter as well as fisherman. She loved all things Texas including its history and reading about it. She was a selfless daughter, wife, mother, grandmother and great grand. A memorial service will be held at Kreidler Funeral Home in McAllen, TX on February 7, 2016 at 2:00 p.m. An inurnment service for family and close friends will be held at a later date in San Angelo, TX. We would like to express our gratitude to the wonderful staff at The Bridges in Edinburg for their excellent care, friendship and love shown to our mother during her lengthy stay.

: Sarah Davis McGuyre, 89, of McAllen, Texas, passed away peacefully on Thursday, February 4, 2016. Born January 1, 1927, at her Grandmother McCabe's house on the Divide ranch, she was the daughter of the late A.B. and Pearl (McCabe) Sheppard.... View Obituary & Service Information

The family of Sarah Davis McGuyre created this Life Tributes page to make it easy to share your memories.