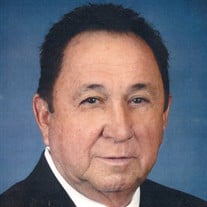 Salvador Gonzalez Jr., age 79 entered into eternal peace and went to be with the Lord, our heavenly Father called his son on April 2, 2019. He was preceded by in death by his parents, Salvador Gonzalez and Alicia Gonzalez. Also preceded by his father-in-law, Teodoro Montemayor, mother-in¬law, Berta S. Montemayor, sisters-in-law, Eliza Montemayor, Maria Teresa (Terry) Moreno and husband Mario Moreno. Salvador is survived by his loving wife of 49 years, Sara M. Gonzalez; his children Saraeli Gonzalez and Salvador Trey Gonzalez Ill, his two sisters Blanca Perez (Richard), Edna Houston, Brother-in-laws Fernando Montemayor (Adalia); Father Ted Montemayor from California, and nieces and nephews. He was born on December 18, 1939, in McAllen, Texas where he resided all of his life. He graduated from McAllen High School and continued his education by graduating from Pan American University, now UTPA, where he was President of the- Inter-College Knights Fraternity and was also elected as a National Officer. In 1959 he proudly served his country with the United States Army. He was a coach in Mission, Texas from 1965-68. He received his Masters degree from Sam Houston University. He was later employed with S.E.D.L. s Southwest Educational Laboratories in Austin, Texas. Salvador was a successful business owner for more than forty years and was well known for his involvement in local civic organization. Throughout his lifetime he served on many organizations. Salvador was a pillar of the community and was actively involved in McAllen where he lived and loved. He was President of McAllen Lamac Inc. in McAllen, Texas since 1973. He was passionately involved in bettering McAllen especially downtown McAllen. As board member of Heart of The City, he was involved in the facilitating of more diverse businesses and promoting and helping to make the entertainment district a reality. He was a member of the Grand Lodge of Texas, member of the Grand Chapter of Texas, member of the Grand Commandery Knights Temple of Texas, life member of the Scottish Rite of Freemasonry of the thirty third degree for the Southern Jurisdiction of the United States of America, Master of the Royal Secret of the 3rd Degree of the Scottish Rite. He was recognized by the Camara Nacional de Comercios Servicios y Turismo de Matehuala. He received his Master Mason 32 York & Scottish Rites, and Shriner Al Amin Temple in Corpus Christi Texas in 1989. He was also a member of The Knights of Columbus. In 1991, he was a Board Member of the McAllen Chamber of Commerce and continued to become President of the McAllen Chamber of Commerce in 1994. During this same time, he became a board member of the M.E.D.C. In 1997, he was chairman of the McAllen Greeter. He was also a board member as well as a lifetime member of the Tower Club in 1998. He was also a proud board member of the Rio Grande Regional Hospital for several years. He loved fishing and playing golf. He loved spending time with his family. He especially enjoyed spending time with his friends talking of the old days. He will be missed dearly. His strength, values, work ethics and selfless love will live on through those he leaves behind. One favorite quote that characterized Salvador and modeled his daily life would be that of "No matter how educated, talented, rich or cool you believe you are, how you treat people ultimately tells all. Integrity is everything." His advice instilled in his children was that of Proverbs 27:2 "Let another praise you and not your own mouth; a stranger, and not your own lips." The Gonzalez family would like to sincerely thank his fine physicians and the entire staff of Edinburg Nursing Home and Rehab as well as Colonial Nursing and Rehab Center. Pallbearers are Fernando Montemayor, Jr., Rick Perez, David Houston, Eric Houston, and Matthew Houston. Honorary pallbearers are: Fernando Montemayor, Richard Perez, David Guerra, Marcos Hernandez, Albert Suarez, Joe Ochoa, Javier Perez, Hector Hernandez, and Kumar Chugani. Arrangements will be under the direction of Kreidler Home, 314 N. 10th Street, McAllen, Texas. Visitations will be held on Friday, April 5, 2019 from 1:30-2:30 pm at Sacred Heart Church, 306 S. 15th St, McAllen Texas. Mass will follow .Burial will take place at Valley Memorial Gardens Commentary in Mission, Texas. The family would like to thank the Colonial Manor Nursing Home, nurses and staff and especially to D. Solis and Dr. Rueda. We would also like to extend a heartfelt and very special thank you to his invaluable caretakers Guillermina Zuniga and Mari Cruz and her family. In lieu of flowers, donations can be made to Infinite Love Center a local organization that help our local homeless, cancer patients, etc. The contact information is as follows: Infinite Love Center,2205 Corner stone Blvd. Edinburg, TEXAS 78539; 956-433-2232; [email protected]

Salvador Gonzalez Jr., age 79 entered into eternal peace and went to be with the Lord, our heavenly Father called his son on April 2, 2019. He was preceded by in death by his parents, Salvador Gonzalez and Alicia Gonzalez. Also preceded by his... View Obituary & Service Information

The family of Salvador Gonzalez Jr. created this Life Tributes page to make it easy to share your memories.