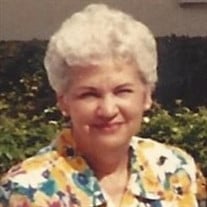 Sally E. Wilson passed away in her living room at the age of 90 the morning of July 16, and we’re all terribly sad to see her go. More than that though, we’re glad to have known her. We’re glad to have been well acquainted with her freezer full of Blue Bell ice cream. We’re glad to have been the recipients of a decades-long stream of birthday cards that likely economically undergirded Hallmark. We’re glad to have known that there was always chocolate on hand around her. We’re glad in particular to have benefited from her warm spirit, razor-sharp wit and iron will. Sally married Darrell Wilson, the founder of D. Wilson Construction Company, in 1950. There should likely be an S with that D in front of D. Wilson Construction Company; it’s doubtful Darrell would have gotten it off the ground without Sally slaving away at paperwork and telephones in the original living room office. The company Darrell built is now a Rio Grande Valley institution that’s helped shape the face of South Texas. The family Sally built made that company possible. Sally was a lover of travel and a student of the human character. She and Darrell frequently trekked through Mexico, and Sally traipsed through Europe, turning their tidy little home on Lark Ave. into a shrine of knowledge and culture. A woman of deep faith, Sally’s religion made her a woman of high principles and strong morals. She passed those characteristics on to three children and a whole passel of grand-children and great-grand-children — some of whom may not do the right thing as consistently as she did but at least know to feel guilty when they don’t. Those descendants are a living legacy and her proudest accomplishment. Sally was preceded in death by Darrell, her son Mike and his daughter Caroline, along with her parents and siblings. She’s survived by her daughter-in-law Sue, daughter Karol and son-in-law Jay, son Bill and daughter-in-law Sheila, along with 14 grand and great-grandchildren, several nieces and nephews, a number of well-loved in-laws and quite a few kindly tolerated outlaws. Her grandchildren include Justin and his wife Rachael, Ryan and his wife Raven, Travis and his wife Lindsay, Jenifer and her husband Ben, Matt and Sammy. She’s also survived by her great-grandchildren, June and Jill, Dylan and Haden, Owen and Myles, and Adalyn and Vivian. She’s survived also by many dear friends, among them her caretaker and friend Isabel Martinez, along with many others she met through church and the company. Sally was preceded in death by even more friends, and though she was surely glad to see them Friday, they’ll certainly be even gladder to see her. Funeral services will be held at 10 a.m. Tuesday at Kreidlers and burial will follow directly after at Roselawn Cemetery. In lieu of flowers, donations can be made to the UTRGV School of Medicine Darrell and Sally Wilson Scholarship Fund in care of the office of institutional advancement 701 E. Expressway 83, Box #13. Sally will be sorely missed and fondly remembered. Love ya lots, Meme.

The family of Sally E. Wilson created this Life Tributes page to make it easy to share your memories.

Sally E. Wilson passed away in her living room at the age of...