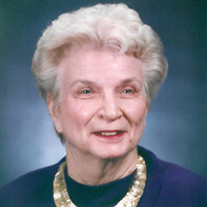 Ruth Spurgeon Evans passed away peacefully at Waterford Gardens August 11,2021 at the age of 95. Ruth was born in Ohio to Harry and Merrill Spurgeon. At the age of 10 when her parents both passed, she went to live in Louisville Kentucky with her aunt and uncle, Dr and Mrs. E. F. Herzer. After graduation from high school in 1944 Ruth attended Northwestern University in Evanston Illinois where she pledged Kappa Delta Sorority, something she later was quoted as saying “Kappa Delta shaped her whole future”. While in college her activities included being Desk Editor of The Daily Northwestern and a member of the Student Council for all 3 years. In her junior year she was elected President of the Lambda chapter and she served so efficiently that in 1947 when she graduated, she was selected by the National Council to be the Graduate Counselor for the newly reactivated Pi chapter at the University of Nebraska. She spent two years there helping the chapter and earning a master's degree in Political Science. There too she carried on her interest in student government by serving as the graduate member of the Student Council. From 1949-1951 Ruth served as one of the first field secretaries, a traveling consultant for Kappa Delta visiting twenty-nine different chapters and helping establish KD chapters at universities across the US. In 1952 Ruth moved to McAllen to help care for her aunt and uncle who had moved to McAllen in 1950. Ruth then worked as a secretary to the principal of Edinburg High School. In 1953 she married Sewell Evans who was a field buyer for F.H. Vahlsing Company, He preceded her in death in 1974. From1957 until 1959 she was appointed National Press Director for Kappa Delta and in 1959, she was elected Kappa Delta’s National Editor a position she held until 1963 when she began her teaching career at McAllen High School. Ruth was also instrumental in establishing the Delta Epsilon Chapter of Kappa Delta in 1966 at the then Pan American College in Edinburg Texas and she also helped form the Rio Grande Valley Alumnae Association and served in every official position there for Kappa Delta. Her last capacity served for National Kappa Delta was as Nominations Chairman from 1970-1971. Ruth is a member of the Order of the Emerald and is also a White Rose Circle member and awarded “The Most Loyal Kappa Delta” in 1996. Ruth taught school for over 25 years at McAllen High school where she was head of the Social Studies department and served as Student Council Sponsor for the last 10 years, something she loved very much. In her early years she served her community by working in the Newcomers Club, she was a member of the McAllen Hospital Auxiliary and taught Sunday School at First Presbyterian Church. She was a member of the local chapter of the League of Women’s Voters, on the board of Avance and served as secretary of the Community Development Block Grant Advisory Council for the City of McAllen. She loved volunteering with the Mentor Program at McAllen High School long after she retired from teaching. Ruth loved to travel, play bridge, mahjong and golf but she especially loved being with her children and grandchildren. She is survived by her son, Bobby Evans (Dana), and her daughter Debbie Evans Brooks (Eldon). Known as Nana she is survived by her beloved grandchildren, Kimberly Brooks Barnett (Ryan), Ryan Evans, Drew Evans, Kari Brooks Denton (Wesley), Chad Brooks (Anne), Jacob Clinton, and Cody Clinton who proceeded her in death. She has 8 great grandchildren. A private family memorial service was held for her on August 20,2021 at Roselawn Mausoleum with the Rev. James Ryan Barnett officiating. A special word of thanks to Lucille Cavazos and her wonderful staff at Waterford Gardens who made her final chapter in life better than we could have ever hoped for. Memorials may be made to Kappa Delta Foundation, 3205 Players Lane, Memphis TN 38125 , Stars Scholarship Fund, P.O. Box 3068,McAllen Tx 78502, or the charity of your choice.

Ruth Spurgeon Evans passed away peacefully at Waterford Gardens August 11,2021 at the age of 95. Ruth was born in Ohio to Harry and Merrill Spurgeon. At the age of 10 when her parents both passed, she went to live in Louisville Kentucky with... View Obituary & Service Information

The family of Ruth Spurgeon Evans created this Life Tributes page to make it easy to share your memories.