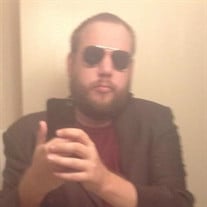 Russell Lewis (Trae) Barlow III February 16, 1982 – January 21, 2021 Russell Lewis (Trae) Barlow III , 38 of San Juan , after a short but courageous battle with cancer, went home to be with his Lord Thursday, January 21st, 2021. His wife and his mother were by his side. He said he was more afraid of living than dying. Our angel got his wings. We thank everyone for their prayers and thoughts for him and his family during this difficult time. The world has lost a beautiful soul. This loss will be greatly grieved by many caring friends and family members. Russell was born in McAllen on February 16, 1982. He graduated from Memorial High School in 2002. He also attended South Texas College and received his Associates degree in IT there. He used the skills he learned to work for various companies in the valley and even did some independent work providing technical solutions for his clients. He is survived by his wife Sylvia A Barlow of San Juan, father Russell Lewis (Lynn) Barlow Jr. of Port Isabel, mother Patricia (Paul) Farias of McAllen. Mother-in-law Alberta (Mike) Rayburn of Beach City, sister-in-laws Synthia Gonzales of Houston and Crystal Lind of Wilmington North Carolina. His loving aunts, Deitrah (Marvin) Davis of McAllen; Adrian Barlow of McAllen; Bettye Barlow of Port Isabel; Jan Wiley of McMinnville, TN; Kathy Ausborn of McAllen; and Deborah Broom of McAllen. Uncles Mark Casey of Kerrville and Brooks (Brookie) Ausborn of McAllen. Cousins, Stephen Wiley, Deuce, Erik and Landen Myatt, Michael Hawker, Gabby Miller, Sean Casey, Alyssa Merlos, Gavin and Emery Jameson, Aeryn Ausborn, Matthew Malone, and a host of life long friends. He is preceded in death by grandparents Russell Lewis and Phenie Irise (Nanny) Barlow, A. J. (Pawpaw Rex) Rexrode, Thomas G (Pawpaw Tommy) Carmichael, and Janice J (Mimi) Carmichael. aunt Barbara Casey and cousin, Mark Myatt. The family has made arrangements with Kreidler Funeral Home for his cremation. With Covid so rampant, limitations on gatherings, and many at risk, memorial services have been postponed till a later date. In lieu of flowers please make a donation to the American Cancer Society in Honor or In Memory of Russell Lewis Barlow III. | The American Cancer Society You'll be able to send an ecard or a paper card after you complete your donation. Send by e-mail to : [email protected] Send by address to : 201 W Walnut Ave, McAllen, TX 78501

The family of Russell Lewis (Trae) Barlow III created this Life Tributes page to make it easy to share your memories.