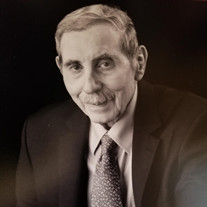 Roy Stewart Dale, age 87, passed away in Houston, Texas on February 18,2020, a life well lived. Roy was loved by his wife, Katie Klein Dale and his sons who survive him, Jonathan Dale and his wife Martina Dale, Harrison Dale and Joshua Dale, Pearson Klein and his wife Leslie Martinez Klein, and daughter, Cassidy Klein. He was predeceased by his son, David Dale, and his parents. Roy is also survived by his sister, Rene Kessler, of Lake Worth, Florida, his nephew and wife, Bill and Herminia Drobkin of Las Vegas, Nevada and his cousin Helen Freeman. Roy was born in a taxi cab in the Bronx, New York and grew up in New York City. Roy moved to the Rio Grande Valley in 1978. He practiced law in Brownsville, Texas before relocating to McAllen, Texas and practicing with Dale & Klein, L.L.P. and marrying his partner in work and in life. He was proud of being an AV rated 58- year lawyer who attended City College of New York and Indiana University Law School. Roy made a career of fighting for underdogs, the downtrodden and the helpless, and always looked for a way to solve the problem that was impossible for everyone else to solve. He succeeded in changing the law in Indiana for a widow who was being denied widow’s benefits under a life insurance policy. Roy considered it to have been an honor to have been appointed as a member of the School Board of South Texas I.S.D. Roy was former member of the military and was a german language interpeter for the US Army during the Korean Conflict. He worked many jobs before completing his education. He had relished farming, reading, investing in stocks, and mentoring many attorneys. Roy had a passion for history that was unparalleled and was an encyclopedia of facts. Roy adored his family and was a member of the Temple Emanuel Congregation. He was charitable, quick-witted, brilliant and scholarly. He was forthright in his opinions and impeccably honest. Roy was the man who took money into the bank when the ATM inadvertently gave him too much money. Roy fought lymphoma and its consequences for 14 years, never choosing to give up and planning his next five years to the end. His brilliant mind never wavered nor diminished as he fought multiple health problems. He was adored by his friends . Roy fulfilled a lifelong dream in November, 2019 by traveling to Israel and experiencing its beauty and rich history. Roy sacrificed everything for his family and felt his family was his most important legacy and his greatest source of strength to the end, never wanting to give in to the illness and to remain here for his family. Visitation will be held from 6:00 to 8:00 p.m. Thursday at Kreidler Funeral Home with his funeral to be held at St. Mark United Methodist Church at 2:30 p.m. on Friday.Burial will follow at Roselawn Cemetery with Rabbi Claudio Kogan officiating. Roy will be deeply missed by his family and all who knew him.

Roy Stewart Dale, age 87, passed away in Houston, Texas on February 18,2020, a life well lived. Roy was loved by his wife, Katie Klein Dale and his sons who survive him, Jonathan Dale and his wife Martina Dale, Harrison Dale and Joshua Dale,... View Obituary & Service Information

The family of Roy Stewart Dale created this Life Tributes page to make it easy to share your memories.