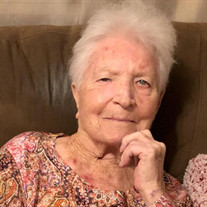 Rosemary (Mettlach) Hensley passed away Wednesday November 24, 2021, at the age of 91. She was born June 29, 1930, in Edinburg, Texas, to Albert and Bertha Mettlach. She graduated from Edinburg High School in 1948. Rosemary worked at the family farm, her dad’s cotton business, the Edinburg newspaper, the Hurst Gift Shop, and the U.S. Dept. of Agriculture. She was married to Robert (Bob) Hensley for 29 years (m. 1955, div. 1984) and raised 6 children while travelling around the world as an Air Force Officer’s wife. After retiring from the military, Rosemary, Bob and the kids moved back to the Rio Grande Valley and in 1974, moved into a house with an orange grove in Edinburg. They went into a partnership with Bob’s brother and sister-in law and built a trailer park in that orange grove. Rosemary worked for over 45 years as Park Manager/Co-owner and later sole owner of that business, Orange Grove R.V. Park. She is survived by her sisters, Bernice Beamsley, Sister Laverne Mettlach, her children (spouse/partners), Rebecca (Michael), Rachel (Mark), Mary (John), Douglas (Linda), David (Melinda), daughter-in-law Rosie Hensley, 13 grand/step-grandchildren, 7 great grandchildren, and many other relatives and extended family and friends that called her mom, grandma, Aunt Rosie or just Rosemary. She was preceded in death by her parents, 3 brothers, Albert Jr., Danny, and Raymond Mettlach, son Richard Hensley, many relatives and those from her ‘Park’ family. Rosemary’s greatest joys were to travel and to see her family and friends or have them visit her. Rosemary also loved to bowl, play cards, Bingo and dominoes, take gambling trips, go on cruises, dance and socialize with people from different places. She was active in the Women’s International Bowling Congress (e.g., Hampton Roads Virginia Chapter President), numerous bowling leagues and the Edinburg Chamber of Commerce. The family would like to extend an invitation to all that can attend her Celebration of Life on Sat. Dec. 11 at 1 to 4 pm at the Orange Grove R.V. Park Rec Hall, 5005 E. State Highway 107, Edinburg. Please arrive early to park and be seated. In lieu of flowers, the family requests memorial contributions to Alzheimer (alzheimers.org) and/or M.D. Anderson Cancer Center (mdanderson.org) support and research.

Rosemary (Mettlach) Hensley passed away Wednesday November 24, 2021, at the age of 91. She was born June 29, 1930, in Edinburg, Texas, to Albert and Bertha Mettlach. She graduated from Edinburg High School in 1948. Rosemary worked at the family... View Obituary & Service Information

The family of Rosemary Hensley created this Life Tributes page to make it easy to share your memories.