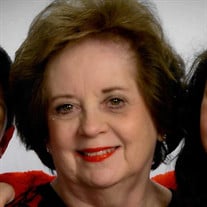 Rose Marie Guerra Rodriguez, 82 of McAllen passed away December 3rd, 2021. She was preceded in death by her parents, Horace Paul Jr. and Rebeca Guerra, her sister Margarita (†Cesar) Salinas and her brothers Horace Paul III and Hector F. Guerra. Rose is survived by her son and daughter in-law Ernesto (Ernie) and Amy Rodriguez of McAllen, her grandchildren Cecilia and Eric Rodriguez whom she adored, her brother and her sister in-law Richard and Rebecca Guerra of McAllen, sisters in-law Josie Guerra of Rio Grande City and Gracie Guerra of San Antonio, her cousin who was like another sister, Maria Emma Lambreton (Manuel Garcia) and numerous cousins, nieces, nephews and grand nieces and nephews. She was born and raised in Rio Grande City. She attended Immaculate Conception School in Rio Grande City and Incarnate Word High School in San Antonio. She completed high school at Rio Grande City High School and then attended Southwest Texas State Teachers College in San Marcos before completing her degree in Education at Pan American College in Edinburg. While at Pan American College, she was crowned Pan American Days 1959 Bougainvillea Belle. Rose was an educator to generations of children and spent most of her 30+ years as an educator with McAllen ISD teaching at Zavala Elementary, Brown Junior High and Lamar Junior High. She was a long-time member of Our Lady of Sorrows Church in McAllen. In addition, she was active in Kappa Kappa Iota Sorority. She had a passion for family, cooking, reading, gardening, shopping, traveling, crossword puzzles and watching sports especially her Texas Longhorns. Serving as pallbearers are her grandson, Eric Rodriguez, Godsons & nephews, Christopher Guerra & Justin Ortega and nephews Felipe Salinas, Hector Ortega and Jody Guerra. Visitation will be on Friday, December 10th from 6 pm to 8 pm with a Holy Rosary at 7 pm at Kreidler Funeral Home in McAllen. A Funeral Mass will be held on Saturday, December 11th at 9 am at Our Lady of Sorrows Church in McAllen with a burial at Roselawn Cemetery in McAllen.

The family of Rose Marie Guerra Rodriguez created this Life Tributes page to make it easy to share your memories.