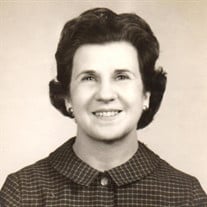 Rosaura G. McDonald, 103, entered eternal rest on Thursday, March 30, 2017 in McAllen, TX. Rosaura or Chala as she was known to her family and friends will be remembered as a wife, mother, grandmother, great grandmother, nurse, teacher, and for her work with the Humane Society. Rosaura was born at La Encantada Ranch near Encino, TX to Noe Guerra, a U.S. Customs Agent, and Maria Guerra (Garcia) of Mier, Mexico. She attended school in Rio Grande City, but completed her high school studies in McAllen. She was encouraged to pursue a nursing degree by her maternal uncle, Dr. Octavio Garcia, a well- known Valley Surgeon. Rosaura applied to and was accepted at St. Louis University School of Nursing. There she met her future husband, Dr. G. James McDonald. She completed her nursing degree and they were married as WWII commenced. Dr. McDonald was in the Army Reserve and was almost immediately called for duty and assigned to a MASH unit. He served with the U.S. Army as a surgeon in both Europe and North Africa for the entire duration of WWII. While her husband was absent, Rosaura moved to Santa Fe, NM with her mother, sister, and twin sons. There both Rosaura and her sister Isabel (also a St. Louis University graduate) took positions as nurses with the Indian Health Service. When the war was over and Dr. McDonald returned to the U.S., the family moved to Altoona, PA where Dr. McDonald began his private medical practice as a Urologist. In Altoona, Rosaura was an active member of the Medical Auxiliary, the Humane Society, and St. John's Catholic Church. There she completed her family by giving birth to her only daughter. After the children were older, Rosaura took a position as Nurse Educator at the Pennsylvania State Health Facility Residential Unit for the Mentally Disabled in Cresson, PA where she worked for many years. In 1975 she and her husband moved to McAllen where Dr. McDonald was employed as a physician by the Veterans Administration. It was then that Rosaura decided to complete her unfinished Master's Degree. At age 65, Rosaura graduated from Pan American University with a Master's Degree in Nursing Education. She was employed by the University as a Clinical Instructor of Nursing for several years and is remembered fondly by her many former nursing students. Rosaura was preceded in death by her husband, her parents and her sisters; Enoe Yzaguirre (Jesus Maria) and Isabel McGoey (Charles). She is survived by her three children, Dr. Frank McDonald (Louise), Dr. Joseph McDonald (Suzanne), and Ms. Andrea McDonald as well as 9 grandchildren and 18 great grandchildren. A private graveside funeral service was held on April 3 at Valley Memorial Gardens under the care of Kreidler Funeral Home. A Family Memorial Service honoring Rosaura will be held at a future date. Memorial Contributions may be made to the Humane Society, a local Animal Shelter, or a charity of your choice.

Rosaura G. McDonald, 103, entered eternal rest on Thursday, March 30, 2017 in McAllen, TX. Rosaura or Chala as she was known to her family and friends will be remembered as a wife, mother, grandmother, great grandmother, nurse, teacher, and... View Obituary & Service Information

The family of Rosaura G. McDonald created this Life Tributes page to make it easy to share your memories.