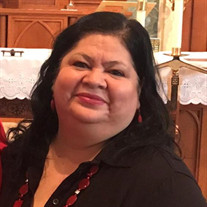 With overwhelming sadness, we announce the passing of Rosa Elia Flores, loving mother, sister, and aunt on November 24, 2020, at the young age of 60. No tribute can entirely encompass the indelible influence she had on her family, express how deeply she was loved, or how profoundly she will be missed. Simply put, words fail. Rosa was born in Danville, Illinois to the late Oscar & Guadalupe Hernandez. The second youngest of 10 children, her family would later move to Aurora, Illinois where she attend East Aurora High School. She moved to Mission, Texas in the summer of 1990 where she lived briefly before moving back to Aurora in 1999. She worked as a sales associate at Walmart for just over 21 years and made lasting impressions on everyone she met. She loved to spend time with her family, to shop (a trait she passed on to her daughter), play bingo, bake, and to travel to Texas whenever possible. She also loved to cheer on her beloved Dallas Cowboys and Chicago Cubs. You would be hard pressed to find a more loyal fan, win or lose. Rosa was a dedicated and loving mother first and foremost. She loved her daughter fiercely and completely and considered her daughter her greatest accomplishment. She showed her daughter what it meant to be loved, how to be strong, and the importance of family. Often referred to as a second mother by her nieces and nephews, she had a special way of making every one feel like the “favorite.” Rosa is preceded in death by her parents Oscar & Guadalupe Hernandez, her sister Criselda Hernandez, and her brothers Ramiro Hernandez & Mario Hernandez. Rosa is survived by her beloved daughter Melissa Perez and son in law Michael Perez, her former husband Octavio Flores, her loving sisters Maria J. Hernandez, Juana (Hector) Perez, Lilia (Alejandro) Martinez, Senobia (Ciro) Flores and dear brothers Gil Hernandez and Oscar Hernandez. She is remembered by her many nieces and nephews. She will be dearly missed and forever in our hearts. As it was her ultimate plan to move to Texas, Rosa will take her final flight from Chicago to the Rio Grande Valley and will be laid to rest in McAllen. A funeral mass will be held at Our Lady of Sorrows Catholic Church in McAllen on Friday, December 11th at 10am followed by a private interment at Roselawn Cemetery.

With overwhelming sadness, we announce the passing of Rosa Elia Flores, loving mother, sister, and aunt on November 24, 2020, at the young age of 60. No tribute can entirely encompass the indelible influence she had on her family, express... View Obituary & Service Information

The family of Rosa Elia Flores created this Life Tributes page to make it easy to share your memories.

With overwhelming sadness, we announce the passing of Rosa Elia...