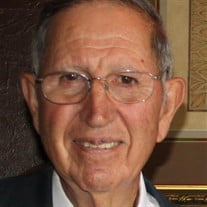 Dr. Roman Raul Garza February 25, 2022 McAllen - Dr. Roman Raul Garza, 86, peacefully went home to the Lord on Friday, February 25, 2022, at his home surrounded by family. Roman was born in Starr County on November 22, 1935 to Roman C. Garza and Eugenia G. Garza, and grew up at El Negro Ranch, north of Rio Grande City. Roman was the first member of his family to attend college. In 1959, he graduated from Texas A & M University and in 1964 received his Doctorate in Veterinary Medicine, also from Texas A & M. Upon completing veterinary school, he concurrently served six years in the United States Army Reserve Medical Corp. He followed with a post graduate residency in Lexington, Kentucky in an equine surgery hospital and later in Louisville, Kentucky at Churchill Downs. In 1965, Dr. Garza moved back to the Rio Grande Valley and opened his first veterinary practice at Del Camino Downs in Mission. On August 6, 1966, he married Adelina Gonzalez, with whom he shared 55 years of marriage. In 1970 he opened McAllen Animal Hospital. “Doc” had a great passion for racehorses and proudly promoted and hosted quarter horse races with his family for almost 20 years. With the love and support of his wife and family, and loyal employees Concepcion “Chon” Perez for over 40 years, Chris Gutierrez for 24 years, and Oscar Landa , “Doc” practiced veterinary medicine for over 50 years until his retirement in 2016. Roman was an outstanding pillar of the community. Growing up on a ranch, he learned at an early age the meaning of hard work and service to others and his community. He supported the Rio Grande Valley Livestock Show since its opening in 1949 by showing animals while being in 4-H and FFA, and later through his service and mentorship in the 4-H and FFA communities. Dr. Garza was honored with many community service awards from local FFA Chapters and the National FFA Organization. With over 35 years of combined service, he served as the show veterinarian and a member of the Board of Directors for the Rio Grande Valley Livestock Show. In addition to his busy work schedule, Roman always made time for his family and clients. Roman grew up riding horses and was active in the rodeo circuit. He was a champion in roping, tie down and break away. Later in life, Roman started riding again and competing in team penning and sorting, even up to 80 years old. His upbringing on a ranch in Starr County and his love for the old cowboy lifestyle led him to participate in many Pan De Campo charity cook-offs in Linn-San Manuel and San Isidro. He was known as “Doc” to many of his friends and clients, and lovingly known as “Honey” to his wife, “Dad” to his children and “Popum” to his grandchildren. Roman was a friend, a father, a husband, a grandfather, a fellow Aggie, a mentor, and a pillar in our community. We will all miss him dearly, but the memories made and the impact he had on our community will always be remembered and will live on forever. The Garza family would like to thank Presidente Home Health and all the caring nurses and caregivers including Romeo, Angie L., Angie M., Teresa, Mari, Dominga, and Isabel for their tireless dedication and care given to Dr. Garza. Roman was preceded in death by his sister Yolanda Falcon, father Roman C. Garza, mother Eugenia G. Garza, and brother Arturo Garza. He is survived by his loving wife Adelina (Gonzalez) Garza; his children: Raul J. Garza, Sonia P. (Mark) Silva, Roman R. (Sue) Garza, and Jorge L. (Crissy) Garza; his beloved grandchildren: Ariana E. Silva, Sophia E. Silva, Jacob J. Garza, Luke T. Garza, Regan Duleba, and Roy Duleba; his siblings Ricky Garza, Diana Cox, and Emilio “Boy” Falcon, and many nieces, nephews, cousins, great-nieces and great-nephews. The family will receive friends and loved ones for Visitation at Our Lady of Sorrows Catholic Church (Main) in McAllen on Monday March 7th, from 5:00-7:00 p.m., followed by a Rosary at 7:00 p.m. A Funeral Mass will be celebrated on Tuesday, March 8th, at Our Lady of Sorrows Catholic Church (Main) at 11:00 a.m., followed by a burial service at 1:00 p.m. at Valley Memorial Gardens Cemetery on Taylor Road in McAllen, Texas.

The family of Dr. Roman Raul Garza created this Life Tributes page to make it easy to share your memories.