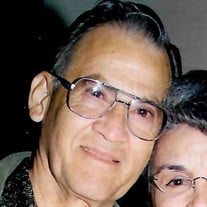 Rolando Vallejo, 91, passed away on May 6, 2020. He was a loving and devoted husband, father, grandfather, uncle, brother, pharmacist and friend to many. Rolando was born in 1929 in Harlingen, Texas to Aniceto and Victoria Vallejo. His parents owned a photography studio they established in Harlingen. He was the youngest of five sons. His three oldest brothers Robert, Rudy and Rueben served in the U.S. Army during World War II. All three safely returned to the U.S. following their service to their country, with Rudy being awarded a purple heart. His brother Ramiro was also in the U.S. Army between World War II and the Korean War. Rolando later enlisted in the U.S. Air Force where he served in the military police as a sergeant during the Korean War. He was proud of his service to his country and was a member of the Texas Veteran's Association and the American Legion. Following his service in the U.S. Air Force, Rolando attended the University of Texas in Austin where he earned a pharmacy degree. It is in Austin, Texas where he met the love of his life, Graciela, who was also attending UT to obtain her teaching degree. After great persistence, Rolando convinced Graciela to begin dating and later marrying him. They lived for a few years in Corpus Christi, Texas before returning to the Rio Grande Valley. They loved being residents of McAllen, Texas and had many friends. They maintained close relationships to relatives who also lived in the valley and in central Texas. Rolando and Graciela were married for over 58 years. They had a very strong and loving marriage and were always seen holding hands, especially during their golden years. In the early 1970s, Rolando opened a small pharmacy, Santa Fe Pharmacy, on the south side of McAllen and eventually purchased the lot across the street where he and his wife enlarged the pharmacy to include nursing uniforms and maternity apparel. They also owned and operated a maternity store in Brownsville, Texas. Rolando was a member of the Lions Club and annually contributed to different pediatric cancer programs. He was an avid fan of college football and always rooted for the Longhorns. It was not uncommon for Rolando to receive many phone calls from his Aggie friends and family on the rare occasion when A&M beat UT. Rolando is preceded in death by his wife, Graciela, who passed away in 2017, their young son, "Tito," Rolando Vallejo Jr., who died of leukemia, and all his brothers. He is survived by his son, Luis A. Vallejo, daughters, Melissa V. Vallejo, Sandra Y. Vallejo Ethridge, and three grandchildren. Rolando's legacy of love, kindness, respect and dedication to work ethic will be carried on by his family. Visitation and rosary will be held from 6 to 8 p.m. on Sunday, May 10, 2020, at Kreidler Funeral Home, 314 N. 10th St., McAllen. Interment will take place on Monday, May 11, 2020 at 10:00 a.m. at Roselawn Cemetery, 1201 S. Main St., McAllen. A memorial mass service will occur at a later date.

Rolando Vallejo, 91, passed away on May 6, 2020. He was a loving and devoted husband, father, grandfather, uncle, brother, pharmacist and friend to many. Rolando was born in 1929 in Harlingen, Texas to Aniceto and Victoria Vallejo. His parents... View Obituary & Service Information

The family of Rolando Vallejo created this Life Tributes page to make it easy to share your memories.