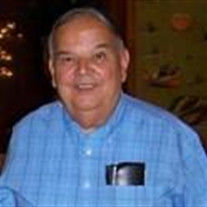 McAllen, TX - Roel Roberto Ramirez, beloved husband, father, grandfather, and brother passed away on August 23, 2019, in McAllen, Texas, following a lengthy illness. He is survived by his children Michael Ramirez (Teresa), Cynthia Ramirez, and Daniel Ramirez (Edna), all of McAllen, Texas, as well six grandchildren, and his sister, Carmen R. Guerrero. He was preceded in death by his parents, Efren and Carmen Ramirez, brothers Dr. Mario E. Ramirez and Efren M. Ramirez, Jr., granddaughter Mari Carmen Ramirez, and his loving wife of 49 years, Frances Gabelich Ramirez. Roel was 76 years old. Roel was part of one of the founding families of Roma, Texas. He graduated from Immaculate Conception School in Rio Grande City and Rio Grande City High School, then attended The University of Texas at Austin. Roel had a car while in Austin, and, on trips home to Roma, oftentimes would stop in San Antonio to pick up his cousin, Thalia Hinojosa (Munoz), who was studying nursing at Incarnate Word College. On one of these trips home, Thalia brought along her nursing school classmate, Frances. Roel was smitten with Frances and wooed her in one of the most romantic ways possible: by taking her to the Forty Acres to see a Longhorns football game. They became the love of each other's life and thereafter rarely were apart. They wed in 1964 and were together for the next 49 years until Frances' passing. One has to wonder what would have happened if Roel had not had that car in college. Roel and Frances had a wonderful life together, filled with travel and adventure the world over. They shared a tremendous love for nature and the outdoors. Roel also was passionate about photography, and nature photography in particular. He loved to spend time at his Loma Blanca ranch in Starr County, where he built water features to attract wildlife, and blinds from which to view and photograph all of the birds and creatures that came to feed and drink. He converted a modest house on the property into what surely was Loma Blanca's first bed and breakfast, where he and Frances welcomed avid birders and photographers from all over the world who marveled at the rich biodiversity and beauty of South Texas. The Ramirez family would like to express their sincerest thanks and gratitude to all of those who helped care for Roel during his illness, including Dr. Jesus Zavaleta & staff, Dr. Eliana Ochoa & staff, Dr. Paul Corn & staff, Dr. Benjamin West & staff, Dr. Billie Marek & staff, Agustin Cisneros, Rosie Garcia, Blanca Resendez Pruneda, Hospice Compassionate Care Service, and Father Roy Snipes. Thank you also to all of our friends and relatives for your kind words and thoughts and gestures. In lieu of flowers, the Ramirez family suggests memorial contributions to the MD Anderson Cancer Center in Houston, Texas. Memorial service will be at 10:00 a.m. Saturday, August 31, 2019, at Our Lady of Refuge (4 S. Eugene de Mazenod Avenue, Roma, TX 78584), with burial to follow at Queen of Peace Memorial Park Cemetery (US Hwy 83 and FM 649, Roma, TX). Pallbearers will be Miguel E. Ramirez and Pablo D. Ramirez. Honorary Pallbearers will be Cecilio Barrera, Manolo Barrera, Jaime Garcia, Cesar Gonzalez, and Luis Ramirez.

The family of Roel Roberto Ramirez created this Life Tributes page to make it easy to share your memories.