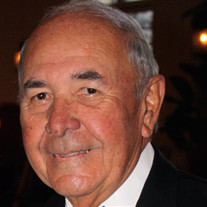 Roel (Roy) Martinez passed away on Monday, April 3, 2017, in McAllen, Texas. He was born in Rio Grande City, Texas on August 13, 1931 to Manuel and Victoria Martinez and was raised in San Juan, Texas. He is survived by the love of his life and wife of 62 years, Aida Ortega Martinez; his five children, Jose Manuel (Josie), Laura Martinez Ilgun, Victoria Humada (Frank), Melissa Smith (Roland), and Tina Guerra (Richard); and ten grandchildren, Victoria Guerra, Virginia Schaeffer, Jose Manuel (Chacho) Martinez, Michael, Erin, Elise and Audrey Smith, Isabella Ilgun, Daniel Humada, and Caroline Flores. He is also survived by his nephew, Noel Martinez, II and his sister-in-law, Irene Martinez. He was eagerly awaiting the birth of his first grandson later in the month. He was preceded in death by his parents; his brother, Noel Martinez; and his sister, Emma Martinez. Roy graduated from Pharr, San Juan, Alamo High School and later from the University of Texas in Austin with a Bachelor of Science Degree in Pharmacy. He was a self-employed Pharmacist for thirty years at Professional Pharmacy and Roy’s Pharmacy, both located on Main St. in McAllen. After he retired from his pharmacy career, Roy focused all of his time running his beloved 2M Ranch in Starr County, Texas. He treasured his drives around the ranch, admiring the native landscape and his cattle operation. Until the time of his death, Roy proudly served as a board of trustee of The University of Texas Rio Grande Valley Foundation since 1996 and served as Chairman from 2000-2002. He was also a Director of Texas State Bank in McAllen, Texas for twenty years. Among his many past professional and civic associations, Roy served on the Board of Directors of the Jefferson Savings and Loan Association, McAllen Medical Facilities Development Corporation, the McAllen Housing Authority, the City Library Board, the Texas Pharmaceuticals and the RGV Associations, and the Santa Gertrudis International and RGV Breeders Associations. He was appointed by Gov. Ann Richards to the Texas State Board of Public Accountancy. Roy loved his church, golf, travel, football, the South Texas sunsets, and he especially cherished spending time with family and friends. A Holy Rosary will be held on Thursday, April 6, 2017 at 7:00 pm at Our Lady of Sorrows Chapel in McAllen. A private family funeral mass will be held on Friday, April 7, 2017. Pallbearers will be his beloved grandsons and sons-in-law. A very special thanks to Elvira Vasquez for her devoted care and companionship for Roy and Aida for forty-three years. In lieu of flowers, the family requests memorial contributions be made to The Emma Martinez Endowed Scholarship Fund at The University of Texas Rio Grande Valley Foundation, Office of Institutional Advancement, EITTB 1.210, 1201 West University Drive, Edinburg, Texas, 78539. Gifts can be made online at give.utrgv.edu/utrgvfoundation. Choose “other” and reference The Emma Martinez Endowed Scholarship Fund, or to The Vannie E. Cook Jr. Cancer Foundation, Inc., 101 W. Expressway 83, McAllen, Texas 78503, www.vanniecook.org.

Roel (Roy) Martinez passed away on Monday, April 3, 2017, in McAllen, Texas. He was born in Rio Grande City, Texas on August 13, 1931 to Manuel and Victoria Martinez and was raised in San Juan, Texas. He is survived by the love of his life... View Obituary & Service Information

The family of Roel "Roy" Martinez created this Life Tributes page to make it easy to share your memories.