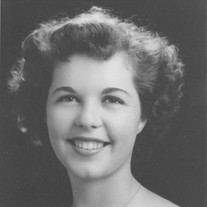 Although Robin lived her last years with Alzheimer’s she was always able to express her love for her family. Sunday, May 15, 2016, in the company of her family, Robin passed from this life. Robin was born in west Texas in 1932 to loving parents Harry and Lois Russell. Always a Texas native, the family lived in west and south Texas where she started High School in Edinburg. The family which included her mother, father, and brother Harry then moved to Corpus Christi. In Corpus, she met and married John Malcom in 1952. Marriage was followed by three children, John, Lois and Russell. Robin was an energetic and active parent for all of her children but especially for Lois. As the parent of a Down’s syndrome child, Robin worked a lifetime to help her daughter learn, work, and live to her fullest ability. Her home was always open to friends and family members. She was a mother to her children and a second mother to many of our friends. After retiring from work as a librarian at Del Mar technical library, Robin moved to McAllen. She is survived by her son, John Malcom, Jr., his wife, Dottie Malcom, and their two children, John and Jacob Malcom. She was preceded in death by her son Russell , her daughter Lois, by her parents, her brother Harry (his wife May) , and by her former husband, John. We would like to thank the owners and staff of Barcelona assisted Living for the care they provided Robin during her stay there. Memorial service will be held 11:00 a.m. Thursday, May 19, 2016 at Our Lady of Sorrows Catholic Church. Instead of flowers, please consider a contribution to Special Olympics Texas RGV, 2708 -D East Griffin Pkwy, Mission, TX 78572.

Although Robin lived her last years with Alzheimer&#8217;s she was always able to express her love for her family. Sunday, May 15, 2016, in the company of her family, Robin passed from this life. Robin was born in west Texas in 1932 to loving... View Obituary & Service Information

The family of Robin Ann Malcom created this Life Tributes page to make it easy to share your memories.

Although Robin lived her last years with Alzheimer’s she was...