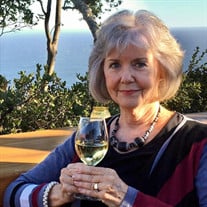 Robin Anne Hartness Cramer, a beloved wife, mother, and grandmother, and a dedicated teacher who taught thousands of students during her career, went home to be with her Lord on February 14, 2021. She was 72. Born September 18, 1948, to Marianne (Golightly) and Robert Lyle Hartness, Robin was delivered on a stormy evening, without the benefit of electrical power, at Edinburg Grand View Hospital in Edinburg, Texas. Her father assisted by holding the flashlight. Raised in Pharr, Texas, Robin attended Pharr United Methodist Church. Her father, Bob, was in the produce business, and the family traveled widely and lived in San Antonio, as well as Salinas and Oxnard, California, before returning to Pharr. She attended Carnahan Elementary School, Eli Whitney Elementary School, Jefferson Jr. High School, and PSJA High School. At PSJA, she was a Bearette and a Bearette twirler, was active in the student council, and served as student council president her senior year, Class of ’67. In 1961, Robin met David Cramer. She was in seventh grade, a member of the cheerleading squad, and he was on the eighth-grade football team. A year later, David asked Robin out, but her mother wouldn’t let her go. But by June 1964, her mother had changed her mind, and Robin and David began dating—staying together through high school, except for a brief time, and college. In 1967, Robin entered Southern Methodist University, graduating in December 1970 with a BA in English and a teaching certificate in English and history. Robin pledged Chi Omega at SMU which led to lifelong friendships and involvement with the sorority. While still a student, she taught freshman English at Highland Park High School in Dallas, an experience that ignited a lifelong love of teaching. On December 27, 1970, Robin and David were married at Trinity Episcopal Church in Pharr. After living in College Station and Corpus Christi, they settled in McAllen in 1977. David designed and built a house on 16th Street, and Robin made it a home. They lived there 41 years, raising two daughters, Carey Laurice and Marissa Anne, who were the love and pride of Robin’s life. Robin taught at local schools, including Canterbury Episcopal Middle School, Morris Middle School, and the Teacher Academy, inspiring generations of children in her community. After 35 years of teaching, she retired and began serving as a field supervisor for ACT-RGV, an alternative certification program for teachers. In 2010, Robin earned National Board Certification as an educator, the most respected certification in her profession—the pinnacle of a career. Words that describe Robin: Christian, wife, mother, grandmother, and friend. She was beautiful and cute, had striking blue eyes, was witty and intelligent, and loved gardening. Next to her family, teaching was her passion; she was a teacher of teachers. She was also her father’s daughter, full of fun and laughter, and a source of good times for everyone around her. She was a dedicated parishioner of St. John’s Episcopal Church, a member of P.E.O. and involved with her local women’s book club. Robin loved her friends and family, a good party, and a great steak paired with fine wine. She enjoyed The Patio on Guerra, margaritas, Arturo’s nachos and frog legs and loved the PSJA Bears, SMU, Texas A&M, the Main Men, the Kansas City Chiefs, Tom Brady, Paul McCartney, General Hospital, black-and-white movies, the Boston Pops, San Antonio, fishing at South Padre Island, Shakespeare, the Texas Hill Country, and traveling in Europe (especially Italy and the Cotswolds). The only things she disliked were politics and David fussing at the evening news. This Valentine’s Day—the day of Robin’s passing—was a stormy night, similar to the day of her birth. It was also her father’s birthday, and three days after her mother’s birthday. The next morning, a bright red cardinal alighted on Robin’s bird feeder—a message from Heaven. Robin is survived by her loving husband of 50 years, David Maurice Cramer; daughters Carey Laurice Cramer (Graham Burchfield) and Marissa Anne Cramer (Chris Webb); grandson Jack Webb; sister Karen Sue Janak (John); and many nieces, nephews, and extended family. She was preceded in death by her parents, Marianne and Bob Hartness; aunt Lou Hartness; grandparents Cleo “Mimi” and Ray Hartness, and Annahlee “GoGo” and Baxter “Jack” Golightly. The family would like to thank the doctors and staff at MD Anderson Cancer Center, Texas Oncology-McAllen, Valley Medical Arts Clinic, Rio Grande Regional Hospital, and McAllen Medical Hospital. They would also like to acknowledge Drs. Limm, Booser, Marek, Chang, Pena, Solis, Enslein, and Ortiz for their professional care and treatment. A memorial service will be held at St. John’s Episcopal Church on Friday, February 26, at 5 PM. Due to space limitations, the family would like to know if you plan to attend in person. Please RSVP at www.robinRSVP.com. The service will also be livestreamed at www.facebook.com/stjohnsmcallen. You do not need a Facebook account to watch. In lieu of flowers, a donation may be made to the St. John’s Episcopal Church Day School in Robin’s name.

Robin Anne Hartness Cramer, a beloved wife, mother, and grandmother, and a dedicated teacher who taught thousands of students during her career, went home to be with her Lord on February 14, 2021. She was 72. Born September 18, 1948, to Marianne... View Obituary & Service Information

The family of Robin Hartness Cramer created this Life Tributes page to make it easy to share your memories.