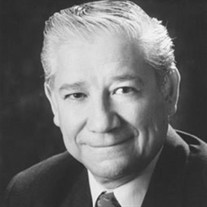 McAllen – Roberto Gutierrez, 83, passed away on December 28, 2019, peacefully in his home. He was a loving husband to his wife, Cecilia prior to her death and remained committed to sustaining the beautiful union they had by caring their values forward. Roberto was a great father, grandfather, uncle, brother, and an accomplished leader. He will long be remembered for his strong work ethic and his commitment to the community. Roberto was a distinguished gentleman, easily recognizable by his silver hair. His strength and can-do attitude will remain in our hearts forever. He taught us that everything and anything is possible with hard work, dedication and passion. Roberto ended many of his learning moments with the phrase “Dale Gas”. Roberto was born on June 11, 1936 and came from humble beginnings. He was a Sergeant in the United States Army – 49thArmored Division; in addition served ten years in the Texas National Guard. His focus and drive for success is evidenced in his educational accomplishments such as his Masters in Education. As a teacher, we will fondly remember him for his commitment to help students with his teachings to assist them in vocational careers. He later used those skills to become a successful businessman but never forgot his humble background by serving his community in various civic clubs. This commitment to helping others led him to pursue city and state-wide positions so he could make a difference for everyone everywhere. Roberto served 14 years as State Representative of District 41. He was the embodiment of the saying, “Together, we do more.” He concentrated his efforts to expanding education in the Rio Grande Valley, promote public safety for children and improve access to health services. State Representative Roberto Gutierrez authored and passed the House Bill that created South Texas Community College, his position on the State Appropriations Committee allowed him to increase the funding for the University of Texas – Pan American (now UTRGV). He pioneered the idea of a medical school in South Texas with the implementation of a Regional Academic Health Center and a UT Biomedical Research Facility. Additionally, Roberto championed an early diabetes detection program for Texas school-age children, passed a bill for bicycle safety, and created laws such as Joey’s Law to protect our youth. His involvement and sponsorship helped create several bills and laws that remain in effect today. He was an incredible role model and inspiration to all. The words of wisdom he gave everyone he met will run deep within the community, and especially with his family. Roberto’s legacy will live on through his children and grandchildren. His son Roberto(Kelly) Gutierrez, Jr. and their children Roberto Daniel, A. Cecilia, Iris Isabelle; Roberto’s daughter Gilda (Joel) Romero and their child Joel Roberto; and Roberto’s daughter Sara (Mark) Gonzales and their children Sarita Cecilia, Gabriela Marie, Andrea Renee. He is also survived by his brother Henry Gutierrez. Visitation will be held from 6 to 8 p.m. with a 7 p.m. rosary, today, Monday, December 30th at Kreidler Funeral Home, 314 N. 10th Street, McAllen. Funeral service will take place at 10:00 a.m., Tuesday, December 31, 2019 at Our Lady of Sorrows Parish, 1108 West Hackberry Avenue, McAllen. Interment will follow at La Piedad Cemetery in McAllen. The Gutierrez family offers sincere gratitude to the wonderful friends of Roberto that have called and sent their condolences. In lieu of flowers, donations can be made to La Piedad Cemetery where Roberto and Cecilia have provided their support over many years. La Piedad Cemetery Office Number is (956) 686-1281. Funeral services are under the direction of Kreidler Funeral Home in McAllen.

McAllen &#8211; Roberto Gutierrez, 83, passed away on December 28, 2019, peacefully in his home. He was a loving husband to his wife, Cecilia prior to her death and remained committed to sustaining the beautiful union they had by caring their... View Obituary & Service Information

The family of Roberto Gutierrez created this Life Tributes page to make it easy to share your memories.