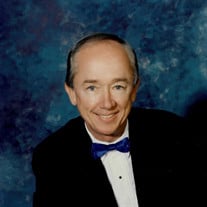 Robert "Tom" Thomas Woolsey, Jr. 83 passed away peacefully in Mission Tx. He was born and raised in Corpus Christi Tx in 1937 to R.T. Woolsey Sr. and Gertrude Mae Williams. Tom was preceded in death by his parents and his wife of 44 years Norma de la Garza Woolsey in 2014. After graduating from W.B. Ray High School in Corpus Christi, Tom attended the University of North Texas where he studied music before enlisting in the United States Army Corps in 1960-63 then Reserves until Honorably Discharged in 1966. Tom's love of music led him to his first job as a radio disc jockey in Georgetown, TX in the 1960's. After arriving in the Rio Grande Valley, Tom continued working in radio at KRGV Radio and then KRIO radio. While at KRIO radio, he began his career in sales and advertising. This eventually led him back to KRGV-TV where he was an Advertising Account Executive he was also well known for making commercials for over 30 years until he retired. Tom had a passion for entertainment as a musician and actor. He was a member of the Valley International Players in the 1970's and played with other local jazz musicians whenever he could. He played drums and piano. Tom had a life-long obsession with flying and earned his pilot's license at an early age of 16, and he continued flying well into his 70's. When Tom came to the valley, he met and married Norma and decided to make the Valley home where they raised 3 children. Tom is survived by his sister Wanda Faye Hodge of Clifton, Tx and his children Alex (Sarah) Woolsey of Arvada, CO, Adriana (Alex) Muro of McAllen and R.T. Woolsey III of Amarillo, TX. Tom was fondly remembered as "Pipo" to his seven grandchildren Elizabeth (Aki) Shimizu of Tokyo, Japan, Jennifer Duckworth of Arvada, CO, Ted Woolsey of Seguin, TX, Ally (Rico) Dominguez of Midland, TX, Alexander (Ludi) Muro of Corpus Christi, TX, Alainey Muro of San Antonio, TX, Georgia (Dillon) Todd of Okinawa, Japan. Tom also has 3 Great-grand children Lucy and Tully Duckworth and Reina Dominguez. Tom had 1 niece Cathy Cannon of Bedford, TX. His dear friend Carol White was always there for Tom and his family is forever grateful. Other survivors are brother in laws Valentin de la Garza and Fernando de la Garza, sister in laws Noelia Antelo and Thelma Benison all formerly of Mission, TX. Tom was a friend to all and had the best neighbors and extended family of cousins, nieces and nephews that are going to miss him. Tom's made many friends and acquaintances throughout the years as he served his church and community. He became a member of First United Methodist Church in McAllen in 1980 where he attended the Friendship Class and Bible Study. Before and during his retirement, He also served on the Administrative Board and Capital Campaign for the new Sanctuary. Close to his heart was his involvement with Easter Seals, Palmer Drug Abuse Program, Valley Alliance for Independent Living, IMAS, Texas Tejano Monument, McAllen Miller International Airport and the McAllen Veterans Administration Clinic. His family would also like to extend sincere appreciation to his caregivers at Waterford Gardens for their kindness and compassion in caring for Tom over the last year of his life. A memorial service will be announced at a later date due to current health risks. In leu of flowers, please make donations in Tom's honor to your local Easter Seals Association at 1217 W. Houston Ave. McAllen, TX 78501 or to the Alzheimer's Association at alz.org.

Robert "Tom" Thomas Woolsey, Jr. 83 passed away peacefully in Mission Tx. He was born and raised in Corpus Christi Tx in 1937 to R.T. Woolsey Sr. and Gertrude Mae Williams. Tom was preceded in death by his parents and his wife of 44 years Norma... View Obituary & Service Information

The family of Robert "Tom" Woolsey created this Life Tributes page to make it easy to share your memories.