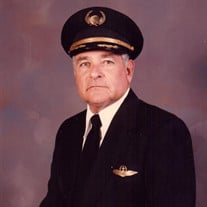 Captain Robert R. Cordonier spent the last six years of his life at the Alfredo Gonzalez Texas State Veterans Home of McAllen, TX., prior to his passing at the Comfort House Facility in McAllen, TX. on Sunday, March 4, 2018, surrounded by family and loved ones. He was 87 years old and will be greatly missed. He was born September 7, 1930 in Troy, KS to William S. and Georgia Cordonier. He is proceeded in death by his parents. He is survived by his wife of 33 years, Irma G.R. Cordonier. Also surviving him is his son, Robert R. II (Sally) Cordonier; grandsons, Robert R. III, Mathew D., and James R. Cordonier; step children, John A. Rodriguez and Rachel (Henry) Torres; step grandchildren, John P. and Adam A. Rodriguez, Allison and Justin Torres, all from Edinburg, TX.; brother, William S. (JoAnn) Cordonier of Wathena, KS; sister, Elen (Lloyd) Wise of Kansas City, MO; and numerous nieces and nephews. Upon graduation he enlisted in the USAF at the age of 17 and served his country for four years. He was a Korean War Veteran. He spent his 1st two years of military service stationed at the Pentagon in Washington D.C. there after; he was transferred to Sheppard Air Force Base, where he was trained for Air Flight and Engine Mechanic. Upon completion of his A/E training, he was sent to Olathe Naval Air Station in KS and later to the Milwaukee Civil airport as an Aircraft Engine Mechanic. With an honorable discharge from USAF, he signed up for the Flight School in Kansas City and obtained his commercial flight license, followed by his instrument and instruction ratings, which qualified him for instruction and commercial flying. In 1957 he became a flight instructor in San Marcos, TX at the Army’s Primary Flight School. In 1959 at the age of 29 he began flying commercially for Texas International Airlines and then Continental Airlines. He retired in 1986 after 35 years in aviation, into one of the most memorable and joyous times of his life “the farm”, there he tended a yearly garden, feeding and petting his farm animals and dogs. We deeply “thank” the Alfredo Gonzalez Texas State Veterans Home and Comfort House staff for their great care, nurture and hospitality during our time of need. Visitation will be held on Tuesday, March 6, 2018, from 4-8 pm with a prayer service starting at 7 pm at Kreidler Funeral Home. Graveside service will be held on Wednesday, March 7, 2018 at 10 am at Rio Grande Valley State Veterans Cemetery, 2520 Inspiration Rd, Mission, TX. Pallbearers will be Robert R. II, Robert R. III, Mathew D., James R Cordonier, John A. Rodriguez, and Henry K. Torres. Funeral services are under the direction of Kreidler Funeral Home, Inc.

Captain Robert R. Cordonier spent the last six years of his life at the Alfredo Gonzalez Texas State Veterans Home of McAllen, TX., prior to his passing at the Comfort House Facility in McAllen, TX. on Sunday, March 4, 2018, surrounded by family... View Obituary & Service Information

The family of Captain Robert R. Cordonier created this Life Tributes page to make it easy to share your memories.