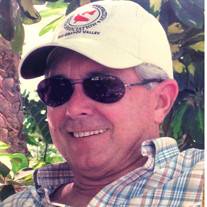 Robert Bond, 73, died in McAllen on September 15, 2109. He is survived by his wife, Kimberly Bond; his children, Lacy Denson and Alan(Roxanne) Bond; his honorary sons, Brandon (Ashley) Tanner, Garrett Tanner. His sister, Mary Bond(Darlan) and brother, Dennis Bond; his grandchildren: Nicholas and Jaclyn Denson and Nathan and Sabrina Bond. Born in Weslaco, Texas, he attended PSJA schools where he was known as "The Fonz". He lived in McAllen working for Nordmeyer Automotive. Changing jobs, he worked for Brown International where he traveled extensively. During this time, he met and married the love of his life, Kim Houts. He then worked for Apple Construction where he learned the building trade. With his wife, Kim, they started their business, Casa Casa Remodeling, LLC. After eighteen successful years they closed their company due to his illness. His first love is his wife Kim, married for 32 years and planned on at least 32 more. His passion was bay fishing and teaching his children, grandchildren, nieces and nephews how to fish. He never missed an opportunity to go fishing and if he wasn't fishing, he was cleaning his boat, arranging his tackle box, or "walking the dogs" which was code for taking a nap. He will be greatly missed by his loving family but there are fish in the bay breathing a big sigh of relief. A memorial service will be conducted at 11:00 a.m. on Saturday, September 21, 2019 at the First United Methodist Church in Edinburg on the corner of Mon Mack Road and Hwy 107.

The family of Robert Bond created this Life Tributes page to make it easy to share your memories.