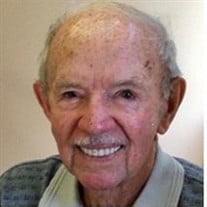 Robert ‘Bob’ Cornelius Oost, age 94, of Mission, Texas, passed away peacefully in his sleep early Friday, May 22, 2020, at The Gardens at Brookridge in Pharr, Texas. Bob was born on February 7, 1926, in Grand Rapids, MI, to Cornelius and Florence Oost. He was a proud World War II Navy veteran, serving in the Pacific Theater during the war. On June 28, 1947, after his return to the United States, he married the love of his life, Eleanor Dawn Herman. Bob recently participated in an Honor Flight from Texas to Washington, D.C., in remembrance of his service to the United State of America. Bob was predeceased by his wife, Eleanor and his daughter, Nancy, as well as his parents and two sisters. He is survived by his daughters Linda (Jerry) VanderPloeg and Lois (Richard) Breckon; three grandchildren, Scott (Cristie) Oost, Tracy (William) Bardwell and Jeff (Cassandra) Jordan; and five great-grandchildren, Isaac, Deauna, Kurtis, Alex and RJ. Bob is also survived by Pete Krystiniak and Doris Rodriguez, Dave and Pat McDonald, and JoAnne Khanani, who were like family to him, as well as numerous nieces, nephews, cousins, neighbors and special friends. In accordance with his wishes there will not be public visitation or a funeral service. The family will have a private interment service at the Rio Grande Valley Veterans Cemetery, and we will host a memorial open house at a later date. Our most sincere thanks to the staff of The Gardens at Brookridge, A Healing Touch Hospice, especially Juan Martinez, RN, and family physician Dr. Daniel Contreras for their loving and gentle care, support and kindness at this difficult time.

The family of Robert "Bob" Cornelius Oost created this Life Tributes page to make it easy to share your memories.