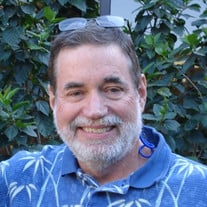 Robert (Bob) Winston Geissler passed away at Doctor’s Hospital at Renaissance in Edinburg, Texas, on Christmas Eve, 2017. Bob was born in San Antonio, Texas, son of Wallace H. and Betty J. (Simpson). Bob graduated from Robert E. Lee High School, Class of ‘66, and graduated from St. Mary’s School of Law Class of ‘74. In his early years Bob was heavily involved in what was widely considered to be the San Antonio golden age of rock and roll during the 60's. He played in various music groups and bands throughout the '60's, once even opening for celebrated rock legend, Jimi Hendrix. As an attorney, Bob was very well respected by his colleagues, clients, and friends for his expertise in real estate law. He had a willing heart to help friends with any legal issues. Additionally, he had a giving spirit of his time, talents, and contributions for many years to First United Methodist Church of McAllen. Bob is survived by his wife, Susan; his sons, Rob and Randy; his stepsons, Scott and Shannon; his grandchildren Samuel and Olivia; his step grandchildren Jordan, Dylan, Christian, Mason, and Addison; his daughter-in-law, Sara; his step daughter-in-law Karla; his brother, Bill, and his nephew, Wally. Memorial donations may be made in Bob’s name to the Palm Valley Animal Center or the American Heart Association. Visitation will be at Kreidler Funeral Home 314 N. 10th Street, McAllen, Texas 78501 on Saturday, January 6, 2018, from 10AM to 4PM with Prayer and Eulogy at 2PM.

The family of Robert "Bob" Winston Geissler created this Life Tributes page to make it easy to share your memories.