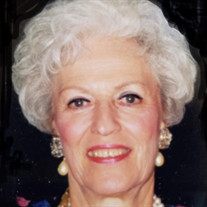 Rita Atlas passed away peacefully in her sleep at home in McAllen, Texas on August 4, 2018. She will be remembered for her elegance and beauty, fierce commitment to and love of family, generous mentorship, loyal friendship, wisdom, grace, unparalleled warm-heartedness, and indomitable spirit. Rita Willner was born in St. Charles, Missouri, on February 22, 1929. She was the youngest of four daughters. Rita graduated from St. Charles High School at the age of 16. She attended nearby Lindenwood College for one year, at her father’s request, and then transferred in 1946 to the University of Texas at Austin. Rita met Morris Atlas during her first semester at UT when each was with someone else during a double date. It was love at first sight. Morris and Rita’s first official date was to attend a costume party with “suppressed desire” as the theme. Morris dressed as Julius Caesar. Rita, much to his surprise, dressed as a bride. They married in 1947 and remained a loving couple and a great team for 68 years. Rita and Morris unconditionally adored, supported, and stood by each other. After Morris graduated from the University of Texas School of Law in 1950, at Rita’s urging and with the encouragement of their close friends Myles and Sylvia Aaronson, Rita and Morris moved to McAllen. They raised four children – Scott, Debra, Lauren, and Lisa. Rita was a devoted and fully engaged mother and homemaker “par excellence.” She enthusiastically organized activities for her children and encouraged and supported them in their various academic and extracurricular projects. She was a significant role model, teaching by example the value of hard work, responsibility, and respect for others. She entertained exquisitely and warmly, for family and friends’ celebrations, and in connection with her children’s activities and Morris’s civic and professional endeavors. “Rita Atlas’s Special Nachos” were a favorite at many McAllen events and drew raves far and wide. Rita also became deeply involved in the McAllen community, the Lower Rio Grande Valley, and the State of Texas. Rita served in and, in many instances, led numerous community and religious organizations. Rita’s community involvement and honors included: Mayoral appointments as Chair of McAllen’s Bicentennial Committee, Police Relations Committee, and Civil Service Commission; Board member of the McAllen International Museum and Chair of its annual fundraising gala, “Collage”; President of the Temple Emanuel Sisterhood; President of the local chapter of the National Council of Jewish Women; Member of the Advisory Board for the University of Texas School of Nursing; Member of Leadership Texas; and Member of the State Democratic Executive Committee. She was named Woman of the Year by the McAllen Chamber of Commerce and selected as the honoree at the Muscular Dystrophy Association’s Third Annual Women’s Leadership Luncheon. In addition, she assisted public school teachers as a math tutor and helped others in many kinds of organizational work. With Morris, she devoted countless hours to University of Texas activities and enthusiastically supported the Longhorns at scores of football games. Rita’s devotion to her family increased further with the arrival of grandchildren. She adored Ryan, David, Adam, Becca, and Nathaniel beyond words. She and Morris agreed that if they “had known how much fun having grandchildren would be, we would have skipped children altogether!” Rita also loved her extended family. She regularly included them in her nuclear family get-togethers, holiday gatherings, and other celebrations. Rita was predeceased by Morris, her parents Max and Fanny Willner, and her siblings Pearl Cohen, Rose Lerman, and Ann Reisfeld. She is survived by her four children: her son Scott Atlas and his wife Nancy, her daughter Debra Atlas, her daughter Lauren Atlas Silverblatt and her husband Alan, and her daughter Lisa Atlas Genecov and her husband Jeff. She is also survived by her grandchildren Ryan Atlas and his wife Alison, David Atlas, Nathaniel Silverblatt, Adam Genecov, and Rebecca Genecov; and numerous nieces, nephews, and cousins. The family would like to extend sincere thanks to Drs. Michael Jelinek, Tommy Yee, Alex Georgiadis, and Phillip Blum. The family would also like to express heartfelt gratitude to Rita and Morris’s caregivers, Fidel Lara, Jimmy Martinez, and George Garcia, who have become dear friends of the Atlas family and were instrumental in both Morris and Rita’s comfort and happiness during the last eight years. After a private burial, there will be a memorial service at 11:00 a.m. on August 10, in the sanctuary of Temple Emanuel, 4300 North Chai (C) Street, in McAllen. Honorary pallbearers will be Ryan Atlas, Alison Atlas, David Atlas, Adam Genecov, Becca Genecov, Nathaniel Silverblatt, Hal DeBerry, Jenny DeBerry, Bailey Gurwitz, Gary Gurwitz, Cecilia Shapiro, and Bill Stocker. In lieu of flowers, memorial contributions may be sent to Temple Emanuel, for “Atlas donation,” 4300 North Chai (C) St., McAllen, TX 78504; or Stroke Research & Education Foundation, for “Atlas Fund,” 4409 Water Edge, Harlingen, TX 78552. Mom, you were a force of nature -- larger than life. We will truly miss you.

Rita Atlas passed away peacefully in her sleep at home in McAllen, Texas on August 4, 2018. She will be remembered for her elegance and beauty, fierce commitment to and love of family, generous mentorship, loyal friendship, wisdom, grace, unparalleled... View Obituary & Service Information

The family of Rita Atlas created this Life Tributes page to make it easy to share your memories.

Rita Atlas passed away peacefully in her sleep at home in McAllen,...