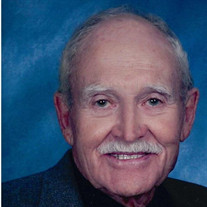 Richard Donald (DICK) Smith died peacefully at his residence in College Station, Texas, September 30, 2020 at age 102 years. Dick was born in Coraopolis. Pa, April 2, 1918 as the third child of William Archie Smith and wife Nellie Catherine Cunningham-Smith. Dick attended Elementary school at Guys Mills, Pa graduating from Meadville Highschool in 1935. After graduation Dick attended Spartan School of Aeronautics, Tulsa, Oklahoma where he studied in Aeronautical design and mechanics and where he first soloed at age 18. After graduating from Spartan, Dick worked for Taylorcraft, Mercury, and Mc Donald Douglas in a variety if administrative positions. In November 1942 he had earned his private pilot's license and had logged hundreds of hours as a private pilot when he enlisted as an Ensign aviator serving as a flight instructor until his honorable discharge as a Lieutenant Commander in a 1945. In 1946 Dick and wife Peggy moved to Hillsboro IL. Where they bought property and built and operated an airport which included a flight school for WWII veterans, a sporting goods store and sporting goods manufacturing company. In 1950 Dick sold his holdings in Illinois and moved to Mission Texas where he became the General Manager of Tri-City Airport located at the former Moore Field Airbase. Until the Government reopened the Airbase as a training station for Airforce Pilots. He signed on as a civilian flight instructor until the base was once again closed in 1960. In 1960 he established Rio Grande Valley Industries and began patenting and manufacturing a Baby safety seats for automobiles. In 1964 he merged his company with Reynolds Research and Manufacturing Co and took a position as President and CEO of the company. Dick retired from Reynolds in McAllen in 1983 and built a winter home in the valley and a summer cabin In Creede, Colorado. Dick was forever active; and never lost his love of aviation and maintained two planes for several years he also enjoyed hunting, fishing, and world travel. Dick was Baptized, Confirmed, and lived in the Lutheran faith as a Christian who practiced his faith in word and deed. Dick is preceded in death by his parents and all three siblings, namely: William Clifford; Edyth Mae; and Jean Louise; one son Phillip Lee; wife Peggy Lou; wife Fae Frances; wife Dona Jean; granddaughter Travis Renee; and great grandson Layton Lee. Dick is survived by; son Roderick Richard; daughter Julie Elizabeth; sons John Mitchell; and Ronald Neil; eleven (11) grandchildren; fifteen (15) great grandchildren; former wife Myrna Jane Hughes as well as a lifetime assemblage of dear friends. Visitation will be held Thursday October 15th, 2020 from 5:00PM to 7:00PM at Kreidler Funeral Home. Christian celebration of life will be held at Noon, Oct 16 at St Paul Lutheran Church on Pecan avenue, McAllen, Texas followed at 3 PM by Graveside services at Valley Memorial Gardens Cemetery, N Taylor Rd. Mission Texas.

The family of Richard (Dick) Donald Smith created this Life Tributes page to make it easy to share your memories.