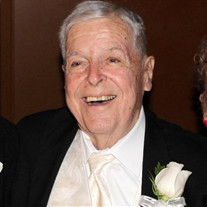 Richard “Dick” Rock went to meet his creator on Wednesday, March 22, 2016 at Alfredo Gonzales Veteran’s Home in McAllen, TX. Dick was Corpsman with the U.S. Navy and was assigned to the Marine Corps during the Korean War. He attended the University of Maryland and worked in the banking industry in New Jersey. Dick married Lillian Marzalek from New Jersey and had two sons. He relocated to Texas in 1978 where he became the Assistant Superintendent and Director of Athletics at the McAllen Parks and Recreation Department. He officiated softball, a sport he loved, for many years and was instrumental in developing additional officials who now follow in his footsteps. He continued to serve the city as Director of the McAllen Civic Center, and later worked with McAllen’s City Manager’s office. Dick was a member of the La Joya Fishing Club where he enjoyed outings with his son and grand-children. He is preceded in death by his wife of 52 years, Lillian and his sister, Louis Morton. Dick is survived by his brother, James Loney; his son and daughter in law, Gary and Alana Rock and their children, Drey and Ryland from Austin, TX; his son and daughter in law, Richard and Monica Rock and their children Christopher, Matthew, Merranda, Monica, Hector, Jose, Celine, and Katelynn from McAllen, TX; and many nieces and nephews. May he find the peace and love of our Lord Jesus Christ. A visitation will be held from 6-8pm with a Rosary recited at 7pm, Monday, March 28,2016 at Kreidler Funeral Home. Funeral Mass will be held at 10am, Tuesday, March 29, 2016 at Our Lady of Guadalupe Catholic Church. Inurnment service will be held at 3pm, Thursday, March 31, 2016 at Rio Grande Valley State Veterans Cemetery.

Richard &#8220;Dick&#8221; Rock went to meet his creator on Wednesday, March 22, 2016 at Alfredo Gonzales Veteran&#8217;s Home in McAllen, TX. Dick was Corpsman with the U.S. Navy and was assigned to the Marine Corps during the Korean War. He... View Obituary & Service Information

The family of Richard Rock created this Life Tributes page to make it easy to share your memories.