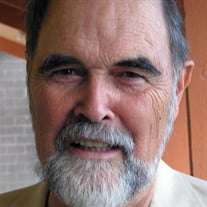 Richard Hyslin, aged 77, died May 9, 2016 in McAllen, Texas. Raised in Portland Oregon, Richard initially earned a BA degree in Chemistry at Oregon State University, and then pursued his true passion for ceramics and sculpture, earning his MA at the University of New Mexico. He accepted a teaching position in 1968 at Pan American College, now The University of Texas-Rio Grande Valley. During his 47 years at Pan American, he established and developed the ceramics program and facilities and later, during the UT-Pan American era, he oversaw the sculpture program and development of new facilities. Serving as Chair of the Art Department for 13 years he was critical in the overall excellence of the department. He was a recognized artist who exhibited his ceramics and sculpture nationally and internationally, including the creation of a 50 ft. Virgin of Guadalupe statue in Windsor, Ohio, and more recently a steel work accepted at Grounds for Sculpture, headquarters for the International Sculpture Center. He was preceded in death by his parents Catherine and Thor Hyslin. He is survived by Nancy, his wife of 44 years, sons Lee Hyslin, Zachary Hyslin, daughter Kirstin Somsen, son-in-law Herman Somsen and beloved grandson Dylan Somsen. Perhaps his most lasting and important contribution has been as a teacher. He has served as instructor, mentor and friend to generations of artists in the Rio Grande Valley. He will be missed. A celebration of his life was held May 14, 2016 at Grace Presbyterian Church. Those who would like to honor him may donate to Grace Presbyterian Church for the Richard Hyslin Memorial Garden. Grace Presbyterian Church, 4701 N. 29th Street, McAllen, Texas 78504 or contact [email protected]

The family of Richard Hyslin created this Life Tributes page to make it easy to share your memories.