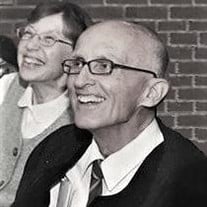 Richard “Dick” Reynolds Herman, known by people in Mexico as “Don Ricardo” went to encounter his Lord and Savior, Jesus Christ, face-to-face after a life of faithful service and total abandonment to his wife, children, and those with whom he labored. Born on November 5th, 1941 in Akron, Ohio, Dick spent his life as a missionary helping individuals meet the person of Jesus Christ and enabling families to build a culture of “life and love” for their children and communities. He spent his early years working in Cebu, Philippines as a Peace Corps worker and upon his return to Akron, established the Charles de Foucauld house near the University of Akron. Shortly thereafter, in 1970, he established a Catholic Community called Bread of Life. He married his life partner, Maureen (Mo), on March 3rd,1974 and together they would toil for family renewal and be witnesses to the true meaning of the vocation of marriage. Bread of Life, which grew to more than 300 families and single members, would be led by Dick until 1988 when he moved with his family to Central America and subsequently Reynosa, Mexico in 1992. Since 1992, Dick, Maureen, Sisters Casey, Mary and Fr. Tim (collectively known as Servants of the Cross) have worked for the renewal of family life within the Diocese of Tamaulipas, Mexico. Based on the teachings of John Paul II, Servants of the Cross established a school for families known as Seguidores de la Cruz whose purpose is to build a culture of life and love to fulfill the mission of the Church to be a family of families. The school located at Rancho Nazaret, and the work, now formally recognized by the Catholic Church, continues to grow and serve witness in a global culture marked by isolation, self-focus, and loneliness. Dick’s life can perhaps best be summed up by a quote from Blessed Charles de Foucauld, a saint he admired greatly: “Cry the Gospel with your life.” Dick is survived by Mo, his wife of 43 years, his 8 children, 14 grandchildren and many laborers with whom he toiled in the vineyards to build God’s Kingdom. In lieu of flowers, the family requests that any contributions be made to Servants of the Cross. These monies will be used to replace the Stations of the Cross at Rancho Nazaret. Visitation hours will be held on Sunday, November 12th, 2017 from 6 – 8 pm with a rosary at 7 pm, at Kreidler Funeral Home on 314 N. 10th Street in McAllen, TX with a Funeral Mass held on Monday, November 13th, 2017 at 10 am at Our Lady of Sorrows Church on 1108 W. Hackberry in McAllen, TX. Dick’s cremated remains will be interned in Rancho Nazaret on Saturday, November 18th at 3 pm.

Richard &#8220;Dick&#8221; Reynolds Herman, known by people in Mexico as &#8220;Don Ricardo&#8221; went to encounter his Lord and Savior, Jesus Christ, face-to-face after a life of faithful service and total abandonment to his wife, children,... View Obituary & Service Information

The family of Richard "Dick" Reynolds Herman created this Life Tributes page to make it easy to share your memories.

Richard “Dick” Reynolds Herman, known by people in Mexico as...