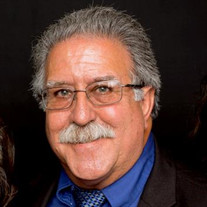 McAllen - Ramon Pedro “R.P.” Guerra, II was born on August 17, 1956, in McAllen, Texas. He grew up on his family’s ranch in San Manuel TX, where he got the chance to do what he loved the most every day, helping his father as a ranch hand. R.P began his law enforcement career with the McAllen Police Department where he served as a police officer for 9 years before finishing the rest of his law enforcement career as a Customs Officer with the U.S Customs and Boarder Protection. He passed away peacefully at the age of 61 in his home on January 5, 2018 surrounded by the loves of his life, his wife and two children. R.P was a devoted husband and father. He was a loving uncle to his nieces and nephews who knew and loved him as “Tio Pete”. R.P. is survived by his wife, Minerva Trevino Guerra, and his two children Sarah Michelle Guerra and Gabriel Esteban Guerra, his mother Dora V. Guerra, his three siblings, Noe M. Guerra, Jr. (Alma), Alma De la Garza (Raul), and Ana Ramirez. R.P is preceded in death by his father Noe Modestro Guerra, Sr., his father in law Jesus “Beaver” Trevino, and his cousin Ruben Ayala, II and his niece Gina Ramirez. Serving as honorary pallbearers will be R.P’s nephews: Noe Delgado, Jeremiah Lopez, Roman De La Garza, Ricardo “R.J.” De la Garza, Hector Cantu, Julian Villarreal. The last years of R.P.’s battle with cancer were brightened by his dear friend and brother in blue - Rick Vela who the family would like to thank for everything he has done and continues to do for them. The family also extends a special thanks to their neighbor Daniel Martinez for being there to help R.P when he needed it most. R.P fought a brave battle that doctors in both Houston and McAllen marveled at. His strength and positive demeanor throughout the past 6 years will never be forgotten. Visitation will be held January 7, 2018 from 1 to 8 p.m., with rosary at 7 p.m. at Kreidler Funeral Home, 314 N. 10th Street in McAllen, TX 78501. Funeral mass will take place on Monday, January 8, 2018 at 11 a.m. at Our Lady of Sorrows Chapel, 1108 W Hackberry Ave. McAllen, TX. 78501. Interment will follow at Valley Memorial Gardens, 316 N Taylor Rd. Mission, TX, 79573.

The family of Ramon Pedro Guerra II created this Life Tributes page to make it easy to share your memories.