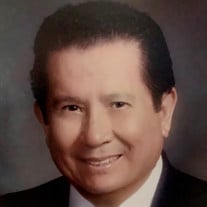 Ramiro E. Salazar, age 83, passed away peacefully surrounded by his family on Thursday, November 7, 2019. Originally from Laredo, Texas, Ramiro was the son of Mauricio and Aurora Salazar and was the seventh of eight siblings. Ramiro graduated from Texas A&M University in 1957 where he received his Bachelor of Science degree in Civil Engineering and also served in the Texas A&M Corps of Cadets. Upon graduation, he was commissioned as a Second Lieutenant in the United States Army and served in the Air Defense, Armor, and Infantry. He served in multiple staff and leadership positions where he commanded troops at all levels. He was a graduate of the United States Army Command and General Staff College in 1974 and retired as a Lieutenant Colonel from the United States Army Reserves in 1996. Ramiro worked for 37 years for the Texas Department of Transportation where he served in many key engineering positions. For over three decades, Ramiro played an integral part in numerous critical highway projects currently used today. His attention to detail and passion for highway and public transportation improvements in the areas of design, construction, and operation will have a lasting impact in McAllen and South Texas. Ramiro retired as the District Administrative Engineer in 1993. After retiring from the Department of Transportation, Ramiro continued his professional career as a consulting engineer on projects such as the B&M International Bridge and the Pharr Water Treatment Plant. Ramiro's love for his profession and community reached far beyond his career. He served on many boards including the Texas Society of Professional Engineers and served as the President of the Texas Public Employees Association. Ramiro served in multiple civic organizations including serving as the Secretary, Treasurer and President of the McAllen Palm City Lions Club. Ramiro also served as a member of the City of McAllen Planning and Zoning Commission from 1985-1990 and as the Secretary and Treasurer of the Hidalgo County Regional Mobility Authority from 2006-2010. Ramiro was a devoted husband, father, son, brother and grandfather. Married to his beautiful Carmen for 60 years, Ramiro's dedication and love for her was eternal. His love and commitment to her serves as an example for all others to follow. He was an excellent role model and always believed in working hard and doing the right thing. He was a strong family man who deeply cared for everyone around him and generous to those in need. A proud Veteran, Ramiro will be greatly missed. His love of country, love of family, and selfless service will be his legacy. Ramiro's strong devotion to God and strong Catholic faith, enabled him to live his life as a son of God. He was a member of the Our Lady Sorrows School Church and served on the Our Lady of Sorrows School Board for many years. Ramiro is survived by his wife Carmen Salazar, children, Sandra Salazar Scott (Tucker), Carmella Salazar, Ramiro "Reggie" Salazar (Lauri), and four grandchildren. Visitation will be held on Monday, November 11, 2019, from 6-8 pm at Kreidler Funeral Home in McAllen with a Holy Rosary at 7pm. A funeral mass will be held on Tuesday, November 12, 2019, at Our Lady of Sorrows Catholic Church at 10:00 am followed by an interment at Roselawn Cemetery in McAllen. In lieu of flowers, memorial contributions may be sent to the: Hidalgo-Starr County A&M Club, PO Box 720862, McAllen, Texas 78504. These contributions will go towards the 2020 Hidalgo-Starr County A&M Club Scholarship fund.

Ramiro E. Salazar, age 83, passed away peacefully surrounded by his family on Thursday, November 7, 2019. Originally from Laredo, Texas, Ramiro was the son of Mauricio and Aurora Salazar and was the seventh of eight siblings. Ramiro graduated... View Obituary & Service Information

The family of Ramiro E. Salazar created this Life Tributes page to make it easy to share your memories.