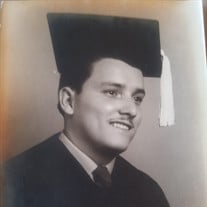 Pharr/McAllen - Paul G. Rodriguez, 93, passed away Thursday, October 18,2018, at his residence in McAllen. Mr. Rodriguez was born on June 18, 1925, in Harlingen, the only son of Jose A. and Julia P. Rodriguez. He is preceded in death by his parents; wife, Maria de los Angeles “Gila” Rodriguez; sister, Matilde Elizalde and son, J. Roberto Rodriguez. He is survived by three sisters, Beatrice Lamey and Elma Escamilla of San Antonio and Dolia Longoria of Harlingen; four sons, Juan Jaime (Diana) Rodriguez of Spring, TX, Paul R. (Myrna) Rodriguez of McAllen, Ruben J. (Rosie) Rodriguez of McAllen and Oscar A. Rodriguez of Austin; one daughter, Teresa I. Ortiz of League City, TX; 13 grandchildren, 11 great-grandchildren and numerous nieces and nephews. The family acknowledges the many years of caregiving provided by Maria “Cuky’s” Trevino to Mr. & Mrs. Rodriguez, as well as Carmen Gomez and Enedina Delgado who also assisted Mr. Rodriguez. Mr. Rodriguez spent the bulk of his adult life in the Pharr-San Juan-Alamo community. Following a successful career as an independent insurance agent, he joined Gold Star Petroleum, Inc. as Vice President and General Manager of South Texas Fueling & Distribution operations until his retirement in 2008. A fervent believer in the value of higher education, he attained his bachelor’s degree from Pan American College at the age of 36 after several years of working, raising a family and attending night classes. He was extremely active in his community through his support of local churches and as a lifelong member of the Pharr Rotary Club. Even in his later years, Mr. Rodriguez remained politically active in school district and city affairs. He never missed an opportunity to cast his ballot. His mind stayed sharp; he was an easygoing conversationalist who kept up with current affairs, sports and the latest movies at the box office. Those who spent time with him know he had the uncanny ability to crack a joke even in a difficult or unexpected moment. Visitation will be held from 5 to 8 p.m., with a 7 p.m. rosary on Monday, October 22, 2018 at Kreidler Funeral Home in McAllen. Funeral mass will take place at 9 a.m., Tuesday, October 23,2018, at Our Lady of Sorrows Catholic Church in McAllen. Services are under the direction of Kreidler Funeral Home. The family is encouraging memorial contributions be made to the VAMOS Scholarship Fund 800 N. Main St., Suite 410, McAllen, TX 78501, or the Juan Diego Catholic High School 5208 South FM 494, Mission, TX 78572.

Pharr/McAllen - Paul G. Rodriguez, 93, passed away Thursday, October 18,2018, at his residence in McAllen. Mr. Rodriguez was born on June 18, 1925, in Harlingen, the only son of Jose A. and Julia P. Rodriguez. He is preceded in death by his... View Obituary & Service Information

The family of Paul G. Rodriguez created this Life Tributes page to make it easy to share your memories.